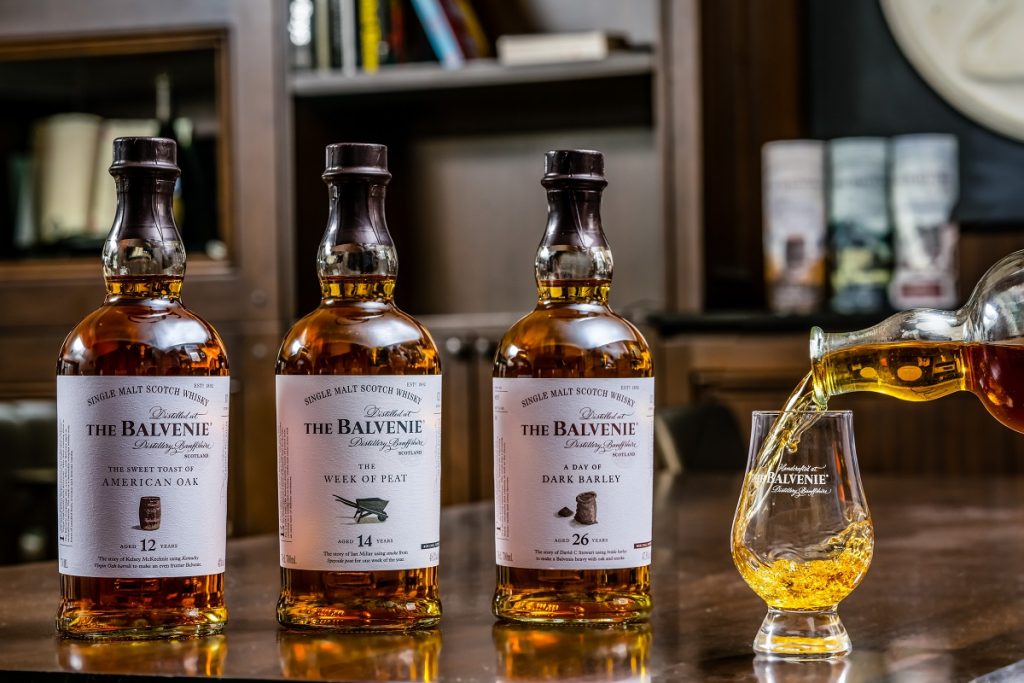 Speyside distillery The Balvenie just launched three new whiskies quite different from the rest of its portfolio. The distillery is known for its 12 Year Old Double Wood and 14 Year Caribbean Cask whiskies — both of which have permanent spots in professional and home bars. Together, the three new spirits make up The Balvenie Stories —  a group of whiskies that represent tales of character, endeavor and craft created at The Balvenie Distillery in Dufftown, Scotland.

Kelsey McKechnie crafted the first whisky in the collection. A rising 25-year-old star in the industry, she was recently named apprentice to The Balvenie’s longtime malt master, David C. Stewart. McKenchie combined her fresh ideas to ancient techniques to create The Sweet Toast of American Oak. This 12-year-old whisky is aged in twice-charred, white American oak barrels from Kelvin Cooperage in Louisville, Kentucky to produce a fruitier, sweeter Balvenie. The barrels are charred once in Kentucky, shipped to the distillery, and then charred again under an even more intense flame. The whisky smells of coffee, caramel and vanilla but tastes of brown sugar, toffee and honey. This bottle weighs in at 43% ABV and retails for $59.99.

The Week of Peat is a collaboration between Stewart and former Balvenie distillery manager, Ian Millar. The two used a one-week gap in the production schedule to experiment with using peat in the barley drying process.  This isn’t to be confused with Balvenie’s existing peated whisky (aptly named Peat Week) which first made its appearance in the 1940s, only to disappear until its most recent appearance in 2017. Also, don’t expect The Week of Peat to taste similar to other peated whiskies like Laphroaig or Lagavulin. The Balvenie’s signature honey, vanilla and citrus flavors are very apparent while the smoke from the peat is noticeable but delicate. The Week of Peat is aged 14 years, boasts a mighty 48.3% ABV, and retails for $99.99.

Finally, A Day of Dark Barley rounds out the collection. When I think of heavily roasted malted barley, it brings to mind thick coffee stout beers, not whisky, but distillers are beginning to borrow techniques from their beer-brewing brethren. The Balvenie originally released this whisky in 2006 after aging for 14 years. However, some casks were retained for extra maturation. The extra 12 years of aging produced a rich, malty aroma and flavor notes full of butterscotch, oak and toffee that stick to the palate like thick molasses. A Day of Dark Barley is aged 26 years, clocks in at 47.8% ABV and retails for a hefty $799. Only 600 bottles are available for retail in the United States.

The detailed stories and guided whisky tasting content can be read and heard in full by scanning a QR code on the bottle with a mobile device or by visiting The Balvenie’s website but the story doesn’t stop there.

To commemorate the launch of The Balvenie Stories collection in the U.S., the distiller has partnered with luxury travel company Celebrated Experiences to create a once-in-a-lifetime adventure for the most devoted whisky connoisseurs who want to create stories of their own. The partners have created the Celebrated Experiences Stories Suite, a three-story penthouse located in Manhattan, to bring the Stories to life. This immersive space contains exclusive artwork, pieces of the distillery, peat, barley, a beautiful NYC skyline and more. The suite is available as a highly exclusive, two-night package and also includes a guided tasting of the Stories range with Kelsey McKechnie alongside a multi-course dinner, a chauffeured tour of the city’s speakeasies and a rare bottle of The Balvenie signed by David C. Stewart.

If you happened to win a recent lottery, you can find more information on the $60,000 package online.

Houston Food Finder with Roma Ristorante.4 hours ago
As always, Roma Ristorante is participating in Houston Restaurant Weeks 2021! Journey to Italy with a three-course dinner for $35 per person. Three dollars from each goes to the Houston Food Bank. Selections include vegetarian and gluten-free dishes. Choose from starters such as creamy Imported Buffalo Mozzarella With Housemade Pesto And Mixed Greens, crispy Fried Shrimp And Calamari With Marinara And Artichoke Sauce and hearty Meatballs With Cheese And Basil. The second course includes pasta options like spicy Orecchiette With Housemade Italian Sausage (a specialty of Chef Scarafile) and Strozzapreti with Fresh Shrimp and Housemade Pesto. Entrées include earthy Eggplant Parmigiana, Chicken Breast Stuffed With Prosciutto And Grana Padano and decadent Veal Scaloppine. Pair your meal with a selection from our extensively curated wine list. Reservations are encouraged but not required. Visit the https://romahouston.com/ for the full menu, or call (713) 664-7581 for more information.