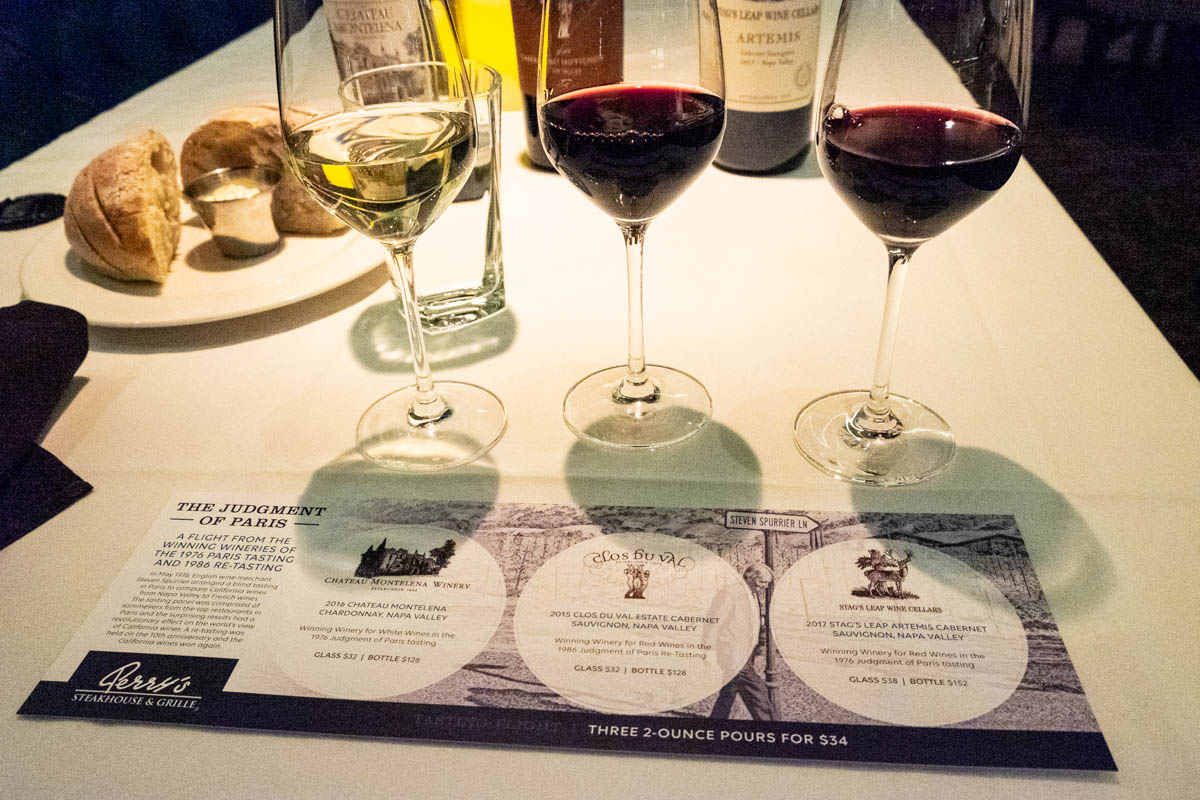 There was a time when the world didn’t have much regard for wines from the United States — not even those produced in Napa Valley. Conventional wisdom was that the best wine came from France. That was the case until the Judgment of Paris. Organized by Steven Spurrier, a Brit who owned a wine shop in Paris, this 1976 blind tasting, judged by French experts, pitted French whites and reds against the best California had to offer. A California wine won both categories. The results shocked the French and launched the modern California wine industry.

While bottles of the exact vintages tasted are now very scarce and would put a collector back thousands of dollars, all Perry’s Steakhouse & Grille locations have acquired modern bottles from three of the top-ranked wineries at the Judgment of Paris. From now through February 29, for a reasonable $34 diners can get a flight of two-ounce pours of 2016 Chateau Montelena Chardonnay, 2015 Clos Du Val Estate Cabernet Sauvignon and 2017 Stag’s Leap Artemis Cabernet Sauvignon.

It would be fair to be concerned that later vintages of these wines might not be as stellar as their 1970s precursors. Indeed, in the early 2000s, Stag’s Leap struggled with excessive brettanomyces in its production. It finally got the problem under control and returned to its previously high quality around 2008. While wine should be considered from personal perspectives — they are about more than just ratings — various wine authorities rank the current Stag’s Leap vintages, as well as the other wines featured in the Perry’s flight, in the low-to-mid 90s.

For those want a hint of what to expect, here are the tasting notes provided by Perry’s Steakhouse & Grille (and, ostensibly, from the wineries). Where applicable, the grape blend percentages of each are noted. All of these wines are produced in Napa Valley.

Of course, you’re likely to want something to eat alongside these wines, so Perry’s Steakhouse and Grille has selected a food pairing for each. The Chateau Montelena Chardonnay is paired with light and crisp yet rich Lobster Tempura; the Clos Du Val Cabernet is complemented nicely with the spiced and slightly salty Perry’s Famous Pork Chop Bites; and the Stag’s Leap Artemis Cabernet Sauvignon practically begs to be paired with a classic New York Strip.

Of course, this tasting is about more than just food and wine. The luxe but not overwrought environments of Perry’s Steakhouse & Grille’s various locations makes this experience more enjoyable.

For an entertaining movie interpretation of the Judgment of Paris competition, check out Bottle Shock starting Alan Rickman as Spurrier and Chris Pine as Bo Barrett of Chateau Montelena. As with many dramatizations of real-life stories, more than a little “artistic license” was taken. A long-promised, strictly factual Judgment of Paris movie based on the book of the same name by Time magazine writer George Taber, the only American journalist present at the event, has yet to come to fruition.

Disclosure: some Amazon affiliate links are included in the above paragraph, which simply means that if you make a purchase from these, our publication receives some monetary support — which ain’t such a bad thing.