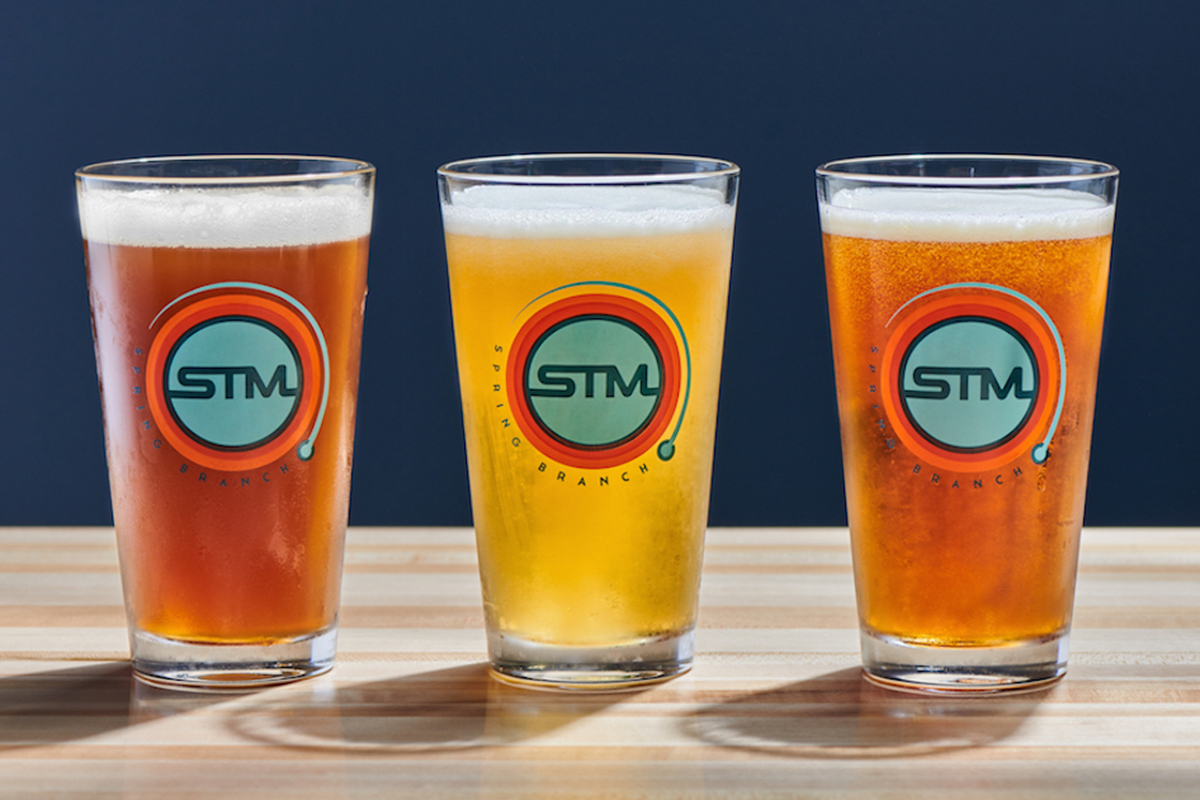 The Spring Branch area has long been a food haven, though one that doesn’t get as much praise as it should. It’s home to diverse restaurants such as El Hidalguense, Seoul Garden and the original Roostar location. Recently, the neighborhood has become a hot spot for new bars, restaurants and craft coffee shops. The new self-service bar and gastropub concept, Shoot The Moon, is the latest addition.

It’s located at 8155 Long Point, in the newly redeveloped shopping center, Spring Branch Village, which is also home to the new Feges BBQ brick-and-mortar location and longtime favorite Tacos Del Julio. This is the first venture from STM Hospitality, which is the brainchild of Kevin Floyd and chef Dax McAnear (both formerly of The Hay Merchant and 1100 Restaurant Group, which also owned Underbelly), and Cecil’s Pub owner Jonas Herd. The group originally announced the plans for the innovative bar back in 2019, but due to the COVID-19 pandemic, there were several delays.

The most interesting part of Shoot The Moon is the wall of self-serve beer, wine and cocktail taps. Customers receive a special card that adds to their tab each time they pour themselves a drink in one-ounce increments — as many as they choose — from the tap wall. There are over 75 drink selections on tap, a large portion of which are craft beer, several brewed in Texas. There are also many wines — reds, whites and sparkling from regions including the United States, Italy, France and South America— as well as a selection of spirits that cover the basics: gin, rum, vodka, bourbon, whiskey, tequila and mezcal.

Four taps currently feature batched cocktails. The selections are two classics, Old Fashioned and Bramble, and two house originals: Oaxacan Viejo, a margarita with mezcal and jalapeno simple syrup, and Red Shirt, with vodka, strawberry-infused Aperol, lime juice and simple syrup. Just because these cocktails are on tap doesn’t mean these aren’t strong. The Old Fashioned, made with Old Forester Bourbon 100, was surprisingly boozy (in a good way).

The taps are easy to operate. Customers just put the card into a reader and pull the lever for the drink they want. The number of ounces poured are reported to the billing system and added to the customer’s tab. First-timers beware: pay attention, because the tap does not stop on its own, potentially leading to a massive cocktail.

The food menu by McAnear is concise and straightforward, with sections dedicated to pizzas, small plates, salads and entrées. The small plate section offers classics guests might expect at a modern but casual diner: housemade hummus, waffle fries, chicken wings and fried calamari. However, the chef did not shy away from putting less common pub snacks on the menu, such as fried cheese curds, Pimento Cheese-Stuffed Mushrooms and a variety of meats that don’t normally get an application of Buffalo sauce, such as crab claws or chicken legs.

There are nine pizza options on the menu, each available with a 12-inch thin, pan or gluten-free crust. Plus, customers can choose the build-your-own option. There are classics such as cheese, Margherita and Meat Lovers, along with inventive combinations like the Dr. Strangelove with fresh pineapple, house-cured bacon, green olives and white sauce, and Deep Dark Mushroom featuring raclette, a blend of roasted mushrooms and a heaping pile of arugula, balanced by a combination of both red and white sauces. The latter is a very good rendition, with the earthy mushrooms partnering perfectly with the salty, stringy raclette. The mildly bitter, fresh arugula ensures the richness doesn’t get out of hand. The “thin” crust was doughier than expected, but the unexpected heft and chewiness was actually quite pleasant. A sprinkle of additional herbs would be welcome and would amplify the flavors even more.

Diners looking for lighter fare will find five salads. There are the usual suspects like Caesar and chef salads, but McAnear throws caution to the wind in the complex Grains & Things, with a blend of farro, wild rice, arugula, feta, cherry tomato, radish, avocado, jicama, cucumber, apricots and carrots — lending some tang and seasoning are dukkah, a lemon-apricot dressing and tahini drizzle. To turn any of the salads into a heartier meal, patrons can add three ounces of chicken for $4 or six ounces of salmon for $18.

Half a dozen entrées are also available, such as baked salmon served with broccoli and cauliflower, confit chicken thighs with cherry-apricot chipotle compote and a side of carrots, and Salisbury steak, topped with mushroom gravy and chipotle cream. At a soft opening, the Salisbury steak tasted like a standard rendition, but it’s typical for dishes to improve and evolve once customers start providing feedback and the eatery gets its systems running smoothly.

Shoot The Moon should prove a welcome addition to Spring Branch. It’s comfortable and friendly enough for families, but it’s the grownups who will have all the fun as they swipe their cards and try as many drinks as they’d like from the tap wall.

Houston Food Finder4 hours ago
October is nearly here, and Beth Levine's latest Hit List of New Houston Restaurants can help you pick your must-visit places from among the latest openings.

Houston Food Finder7 hours ago
Save the date and sample BBQ from many of the best-known pitmasters in the Greater Houston area and beyond — while support a local organization at the same time. The Pitmaster Party: Wild Game Edition barbecue fundraiser at Doziers BBQ in Fulshear, Texas is Saturday, October 9. See the full list of participating pitmasters and ticket information below!
#houstonevents #feedtheneed #houstonbbq #texasbbq #fulsheartx

Saturday, October 2nd | 2 to 9 p.m. | Pearland Town Center Bring your friends, your appetite, and your lederhosen to this year's Oktoberfest-themed Music to My Beers extravaganza. The event highlights independent craft breweries south of Houston, and is FREE and open to the public. Local
72 2    View on Facebook