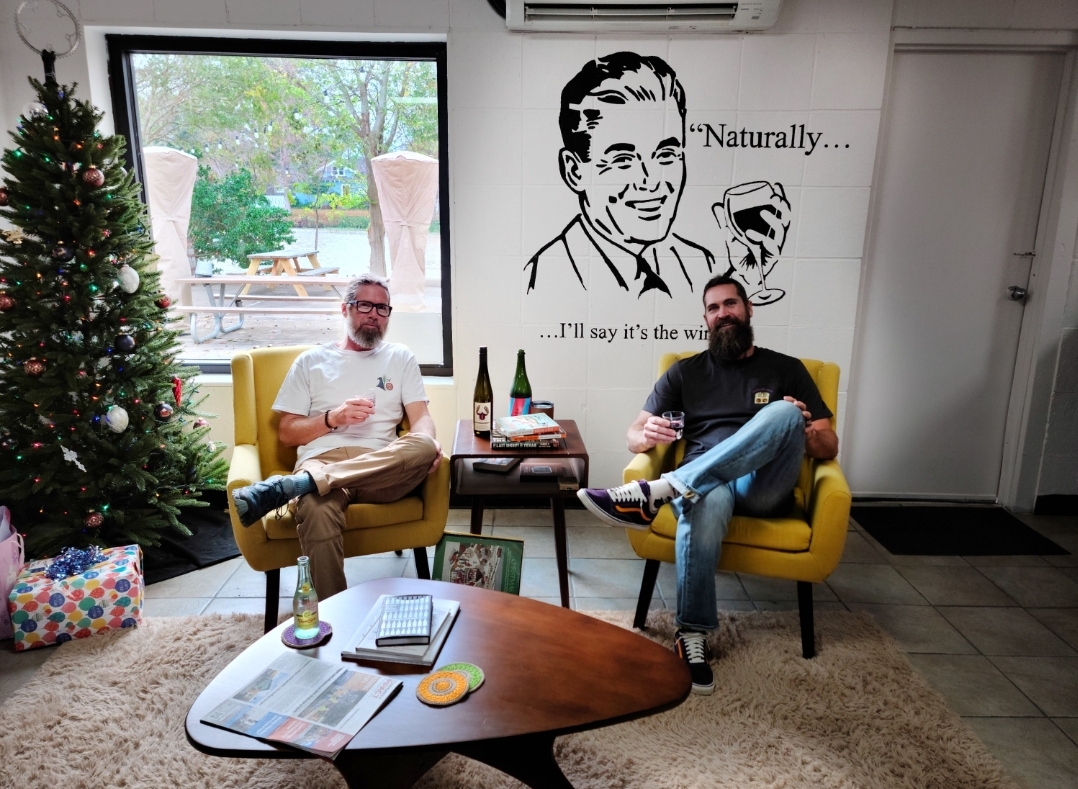 Sugar Land has its first wine shop dedicated to the growing natural wine movement. The recently opened Imperial Wine SLTX is a neighborhood bottle shop located at 106 Bay View less than a mile from the old Imperial Sugar Factory — but refined sugar is one ingredient you won’t find added to any of the wines carried in this charming store.

A key part of the ethos of natural wine, also known as low- or minimal-intervention wine, is offering a true snapshot of its terroir and preserving the purity by not adding adulterants such as sugar or coloring, or taking anything away through fining and filtration. In addition, natural winemakers typically don’t allow pesticides or harsh chemicals in the organic vineyards they work with. This winemaking process also involves spontaneous fermentation with naturally occurring yeast. The final product is bottled with low to zero sulfite additions.

The store is owned by two Sugar Land residents, Chad Starrett and Clayton Taylor. After 24 years of teaching and coaching, Starrett decided to step away from his career in education after the hurdles of COVID left him uneasy about his future there. Several years ago, he struck up a friendship with Taylor and they often discussed Starrett’s apprehensions over trips to their local coffee shops. Starrett had heard about natural wine while watching chef and musical artist Action Bronson discussing his appreciation of it. But he had his aha moment when he sipped his first orange wine — a style made from white grape must that stays in contact with the skins, adding a range of unique flavors and orange hues (no other coloring involved!) — at Light Years, a natural wine bar in Montrose. He was immediately hooked.

He began seeking natural wine retailers in and around the 610 Loop, such as The Heights Grocer and Bodega Bellaire, which sadly closed at the end of 2022. From there, an idea began to ferment. He discussed operating a natural wine shop with Taylor, which led to a great deal of “market research” conducted over many shared bottles at the aforementioned wine purveyors. The duo were soon devising a plan to open a wine store of their own.

Their approach is eager and unpretentious. Starrett and Taylor both enjoy meeting people and engaging in conversation. Starrett says, “We love that natural wine ‘converses’ with the drinker. Wine is to be shared and when the wine has something to say, conversation between friends will flow!”

It’s this personal touch that really elevates the shopping experience. The store is airy and unstuffy, with an inviting lounge area complete with a vinyl record player in a back corner and a window overlooking Oyster Creek. While Imperial Wine is only licensed as a retail store, guests can enjoy a bottle creekside in a space with tables and a small viewing dock that’s shared with the business next door.

Eventually, Starrett and Taylor would like to operate Imperial Wine as a bar with retail space, but the required licensing will ultimately come down to Sugar Land’s zoning laws upon application. Starrett’s brother Clint, who owns N-tegrity Hemp next door, is all too familiar with the struggles of navigating those laws. For over two years, his business operated just outside city limits before he was allowed to move it within the city limits after multiple interviews with local news outlets and a meeting with the mayor. N-tegrity Hemp is also currently home to Rasa Libre Coffee, a high-quality, pop-up coffee bar that guests can enjoy before, during, or after shopping at either store.

Despite the strict zoning laws, Starrett and Taylor always knew they wanted to open the store in Sugar Land in order to share their love of “natty wine” with their neighbors. If wine isn’t your thing, Imperial Wine also offers a selection of craft beer and mead, including a line-up from WildFlyer Mead Company, which is owned by a fellow Sugar Land resident.

Imperial Wine offers Friday happy hour tastings from 5 to 7 p.m. every Friday. Guests are able to sample featured wines, and there are often food pop-ups taking place on the patio. It’s a great way for those who are curious about natural wine to see what it’s about.

If this all sounds like something you might have a natural affinity for, then take a trip to Sugar Land to visit Imperial Wine SLTX. You may see me there!

Disclosure: author is a wine and spirits vendor, and counts Imperial Wine among his clients.

Mario Sebastian-Berry is a wine and spirits vendor who has been in the hospitality industry since 2002. Currently, he represents Blanco, Texas-based Andalusia Whiskey Co. and multiple wine labels. Somehow, he also finds time to be Houston Food Finder’s social media manager.