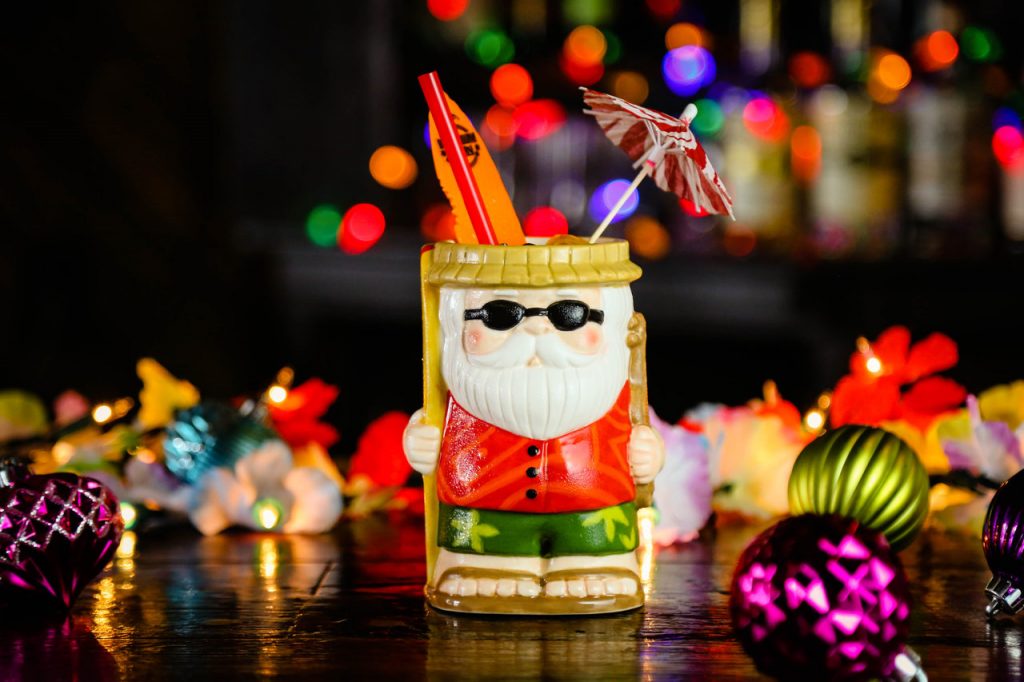 Four bars in the Greater Houston-Galveston region are getting opportunities to host some popular holiday-themed pop-ups, which means patrons are in for eggnog, mulled drinks and outlandish levels of holiday decor. Julep at 1919 Washington,  Daiquiri Time Out at 2701 Market in Galveston and Preamble Lounge and Craft House at 20801 Gulf Freeway in Webster are turning into Miracle bars from November 23 while Lei Low at 6412 North Main is taking on the Sipping Santa tiki bar theme starting on November 25. All three are keeping the alter-ego identity through December 31.

Miracle was originally conceived as “Miracle on Ninth Street” in New York City by bar owners Greg Boehm and Zach Sharaga and bartender Nico de Soto in 2014 just before their new bar, Mace, debuted in the same space. (Boehm is also a co-owner of upscale barware shop Cocktail Kingdom, which supplies holiday-themed glasses for the events that customers can also buy and take home.) A year later, a tiki-themed take on the same idea debuted in Boehm’s other bar, Boilermaker, which he co-owns with Erick Castro of Polite Provisions and Raised By Wolves in San Diego. This year, both Miracle and Sippin’ Santa have finally made it to Houston and Galveston.

A total of 90 bars around the world are participating this year. The point of the over-the-top decorations and holiday drinks, besides embracing the holiday spirit to the fullest, is to raise money for charity.

Cocktail sippers can purchase mugs, coupes, highballs and rocks glasses, custom-made for Miracle by Cocktail Kingdom, with proceeds going to Action Against Hunger.

“Last year, the staff and I were in D.C. for the Bartender’s Guild Repeal Day and we visited Angie Salame and Derrick’s Brown Miracle pop-up, We had the best time and it was absolutely amazing, said Julep owner Alba Huerta. “The walls and ceiling were covered in Christmas decorations, the drinks were nostalgic and the ambiance was just charming. I also had a chance to visit The Roosevelt’s Room Miracle and I had the same experience as they also expressed their creativity through this Christmas pop-up. When given the chance, I jumped right to it, knowing that we would also do a great job decorating and hosting a Christmas Wonderland at Julep.”

Daiquiri Time Out is open 4 p.m. to 2 a.m. Tuesday through Sunday.

Lei Low is one of only 12 tiki bars in the world that’s hosting a Sippin’ Santa pop-up. This year, the tropical theme with a holiday twist gets some added star power from tiki godfather Jeff “Beachbum” Berry, who’s created a series of tiki drinks for the popular popup. “I understand that Beachbum Berry picked the bars he wanted to participate,” said Lei Low’s Russell Thoede. “And that’s pretty incredible. I’ve never met Jeff, but he is such an inspiration of mine. I mean, tiki was dead. He kept it alive with his writing and his passion. There would be no Lei Low without Beachbum Berry.”

Similarly to Miracle, special Sippin’ Santa collectible mugs and glassware are available for purchase. Ten percent of the proceeds from sales will go to Action Against Hunger, a nonprofit that works to eradicate hunger around the globe.

“We’re excited to take part,” said Thoede. “We’re kicking off the event with a party on November 25. Par Avion is going to play. Then, next month, on December 9, we’re hosting a holiday arts market with local designers. It’s going to be a great holiday season.”