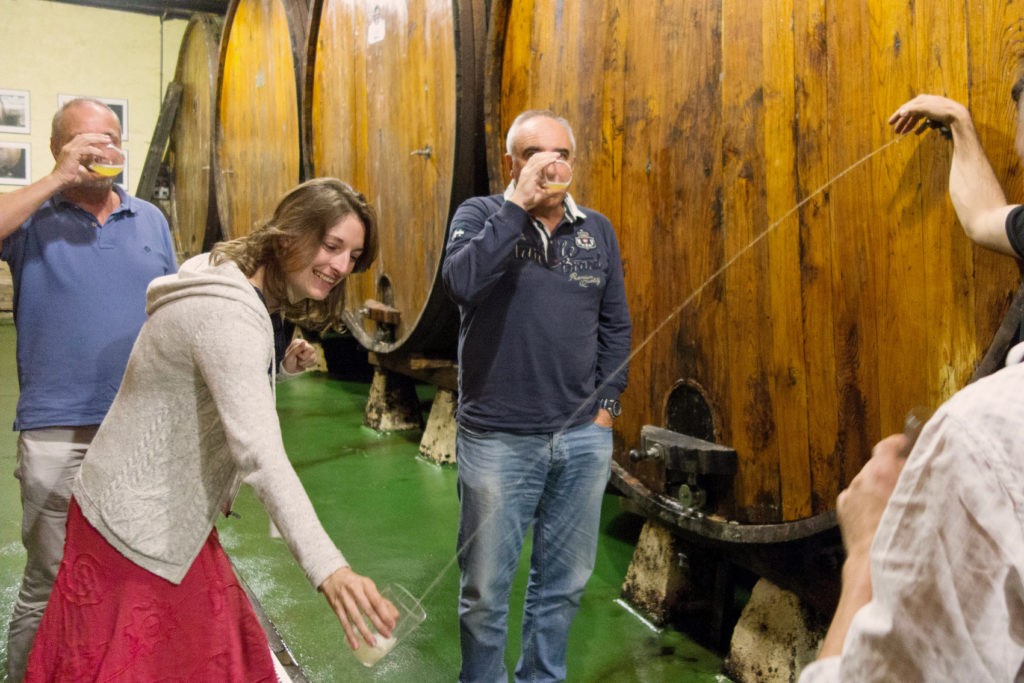 Camerata at Paulie’s, 13 Celsius and Public Services Wine & Whisky are joining forces to celebrate the start of the Basque cider season with a series of events called “¡Txotx!” (pronounced “choach”). That’s the exclamation of a cider house owner to alert his guests that he’s about to tap a barrel and to gather around to fill their glasses.

From Thursday, January 19 through Sunday, January 22, all three participating bars will channel the spirits of the sagardotegias, or Basque cider houses that, as a centuries-long tradition, throw open the doors to the fermentation rooms and invite guests to dine and drink freshly fermented cider straight from the casks.

The bars will all feature hard cider (“sidra” in Spanish), txakoli (dry sparkling white wines) and selections from Rioja Alavesa, a region known for its spicy red tempranillo.

The Basque region is an area that runs from Northern Spain and extends into the southeastern corner of France. Hard ciders from this region are much drier (and therefore less sweet) than those produced in the United States and other parts of Europe. There is no added sugar or carbonation, so it’s poured from a height of at least meter from a barrel or, on a smaller scale, from a glass vessel with a narrow spout called a porrón. It’s called “throwing the cider” and while it’s stylish and showy, it also serves a purpose: to aerate the cider, which breaks up the natural carbonic gas, adds oxygen and releases the aromas and flavors.

In addition to the ongoing cider showcases, there are two special events, both at Camerata (1834 Westheimer):

Porrón Pouring Competition, Thursday, January 19, 10 p.m.: This kick-off event has an industry-friendly start time to allow professionals to head over after work. The entry fee is $15 for one- or two-person teams. Contestants will be judged on knowledge as well as the difficulty, creativity and execution of their pours. The judges are David Buehrer of Greenway Coffee (and others), sommelier Brandon Kerne of Pappas Bros. Steakhouse and Phaedra Cook of Houston Food Finder (aka “yours truly”).

Basque Beverage Seminar, Saturday, January 21, 1 p.m.: Camerata general manager Chris Poldoian is speaking on the traditions and characteristics of Basque ciders and wines. The cost is $50 and ten different ciders (or “sidra” in Spanish) and wines will be tasted.

Poldoian says, “The goal of Txotx is to foster a long-term appreciation of Basque wines and ciders within the Houston community.” In other words, it’s an opportunity to drink, have fun and gain cultural knowledge in the process: a win-win-win situation.

Houston Food Finder3 hours ago
Looking for Halloween events around town? These restaurants have got you covered! Check out this list of what to eat and drink on this year's spook-tacular holiday from Holly Beretto. Where will you be going?

Houston Food Finder8 hours ago
Despite a still grim overall picture, bars are finally seeing a break in the metaphorical clouds. Several local businesses have reopened thanks to updated food menu protocols. Ryan Baker tells us who has just reopened and how they are accommodating the new requirements.

Houston Food Finder12 hours ago
And we're back! The rebuilt Houston Food Finder website is up and running! It won't look terribly different... a little cleaner, a few new features and still free of obnoxious pop-ups. We'll have one little slide-in coming to encourage newsletter sign-ups and that's it. An easy reading experience and clean interface is a promise we've kept since our inception in November 2016. Most importantly: the back end of the site is now stable and future-proofed. It should get us through at least another four years.