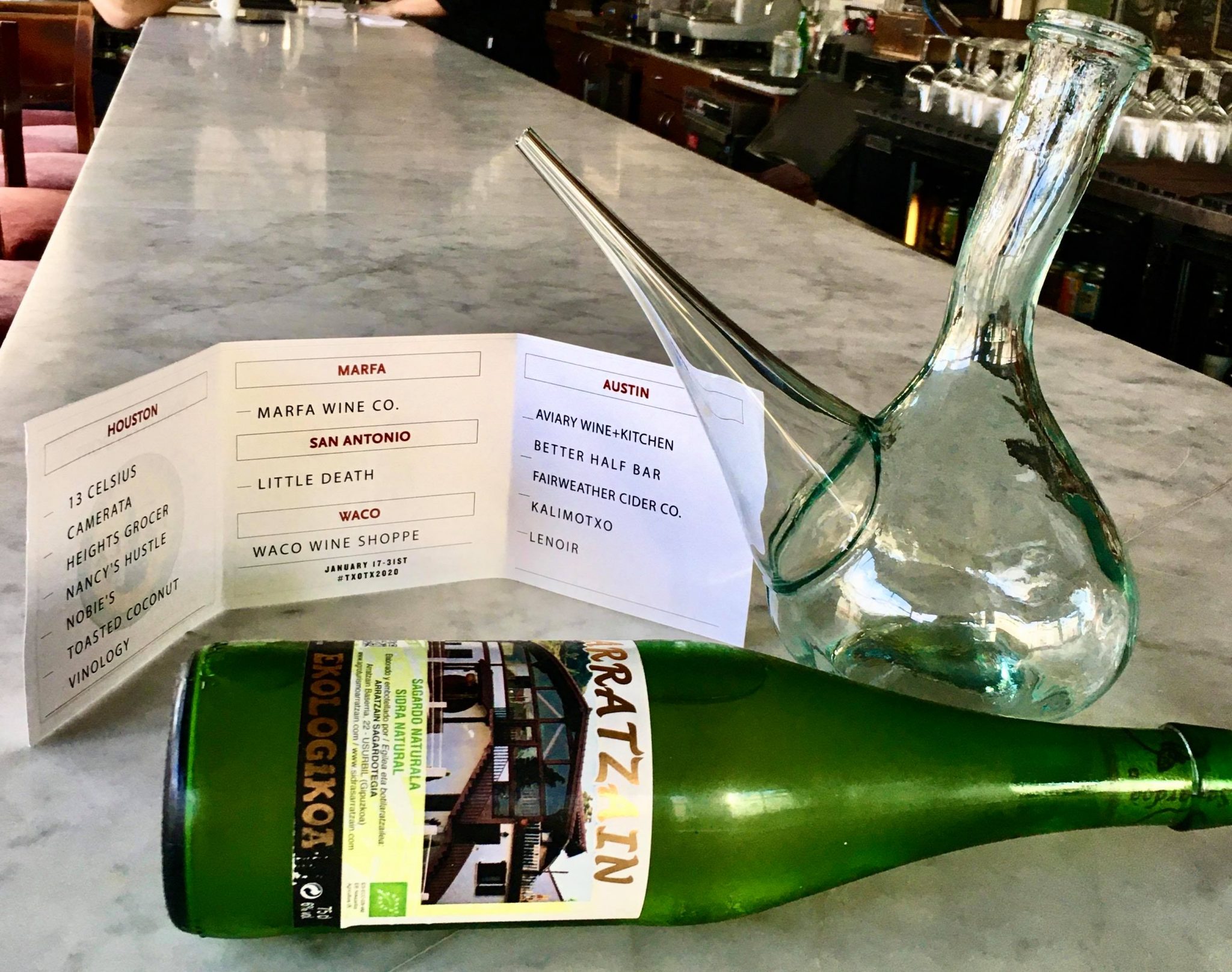 A TXOTX passport, Basque cider and pórron at Camerata. Photo by Chris Poldoian.

Texas TXOTX, the annual celebration of food and drink from the Basque region of Spain, runs through January 31. This is the fourth year that Texas bars and restaurants — including several in Houston — have participated in showcasing what this mountainous region nudging the French border has to offer.

(There are other participants in Austin, Waco, Marfa and San Antonio, too. For the full list, visit the Texas TXOTX website.)

Basque country includes the northern part of Rioja, which is known for the red wine Tempranillo. On Thursday, January 23, Camerata is hosting a special happy hour from 6 to 8 p.m. to showcase this and other wines from the area. Holly Wing of De Maison Selections, a prominent importer of Basque wines, is guiding guests through a tasting of three wines from the Rioja Alavesa. According to the event page, the region does not produce a ton of grapes, but what it lacks in fertility it makes up for in interesting terroir. In Spain, it’s traditional to serve pintxos, or bar bites, with wine, so Camerata is also offering a small selection of those. No tickets or reservations are needed to attend the event.

On Sunday, January 26, there’s a second TXOTX event, and it features a bar pop-up from New Orleans. Bacchanal Wine Bar’s staff is coming to town for a collaborative Basque Bash. From 2 to 8 p.m., the Bacchanal chef team is taking up residence in the kitchen of Paulie’s next door and preparing both their signature dishes and pintxos. On the other side of the building, Bacchanal wine director Joe Briand is teaming up with Camerata Chris Poldoian for Basque beverage pairings.

Two other Basque imports are featured during the rest of the month. One is a white wine called Txakoli (pronounced cha-coal-lee), a light-bodied and even slightly briny white wine ideal for seafood that’s usually made from the grapes Hondarribi Zuri and Hondarribi Beltza, which are indigenous to the region. The other is Basque cider, called sagardo in Spain. Cider season starts on the Day of San Sebastian and the Basque cider houses, or sagardotegis, open the barrel rooms to the public and host big parties. Sagardo is poured directly from the casks, and a cider maker shouts “Txotx!” (pronounced “choach”) upon opening a fresh one. That word was the inspiration of the name of the annual celebrations and tastings in Texas.

Above: cider poured straight out of the barrel in Basque country.

One of the most fun aspects of TXOTX is getting to practice drinking from a porrón, a glass pitcher with a thin spout. In Spain, it’s used as a communal vessel to allow multiple people to drink the contents. Lips are to never touch the spout. Instead, the goal is to lift the porrón and aim the wine or cider into your open mouth. It takes some practice, and this is not a time to wear your best shirt. Practicing, though, can be messy fun in the best way.

Camerata is not the only one celebrating Basque cider season. Here are other Houston bars, restaurants and a wine store all doing the same. Unless otherwise noted, each is offering a selection of Basque wines and sidra by the glass, half glass or bottle. There’s also a passport that you can pick up at any participating bar. Get stamps to track your journey, and one bar will even reward you for it.

Keep up with the ongoings on social media with hashtags #TEXASTXOTX and #TXOTX2020.