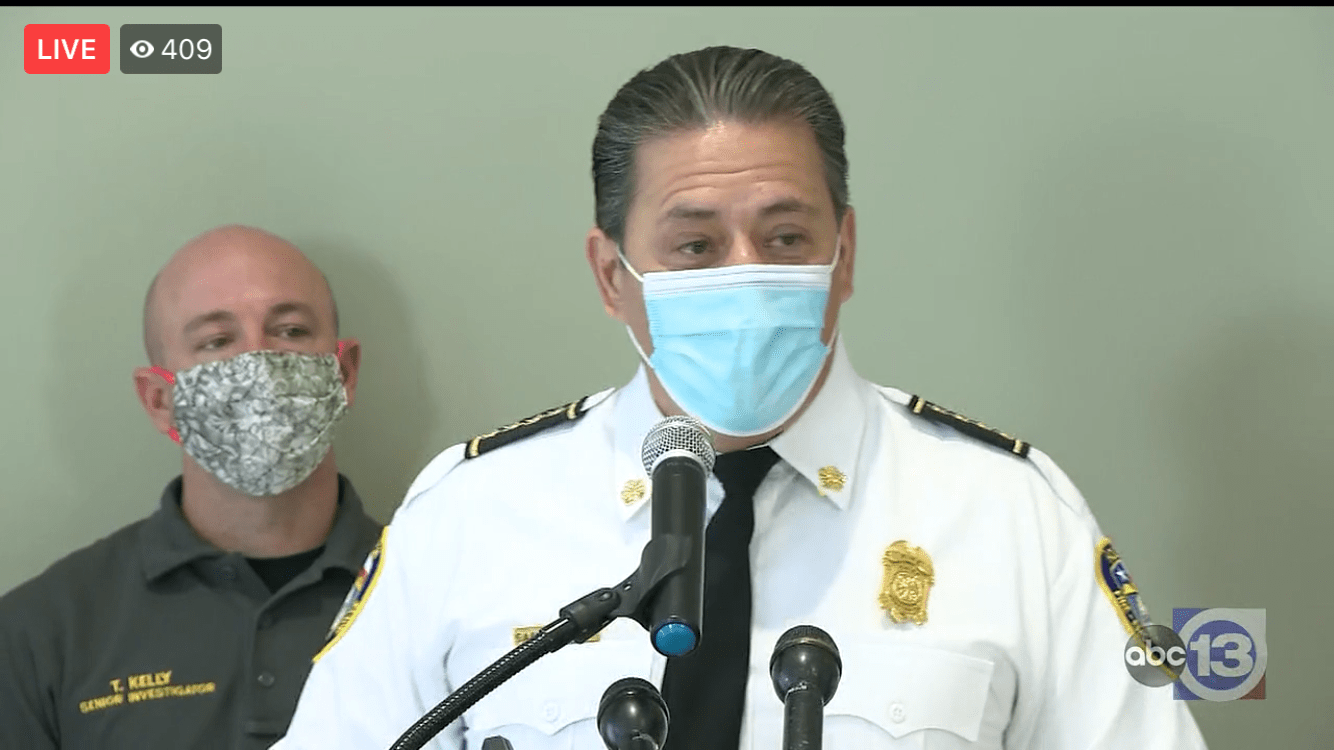 On June 12, Houstonians as far as two miles away were startled just before 5 a.m. when the deck and right side of Bar 5015 at 5015 Almeda exploded into rubble. Wood and other debris were shot over 100 feet down the block and into a parking lot across the street. At a news conference today, the Houston Fire Department showed surveillance video categorically proving that the fire and explosion was deliberately caused. The video below shows at least four men liberally pouring what appears to be gasoline or some other type of accelerant over the wood patio at the bar.

Houston Fire Department chief Samuel Peña is asking for the public to help bring these men to justice by reviewing the surveillance video and calling (713) 222-TIPS with any information about these arsonists.The video is below and there are also still images of the criminals  at the Houston Fire Department website.

“We’re asking for the community’s help in this investigation,” said Peña. “This has caused significant damage to the business and the livelihoods of those that this business employs. That this was an intentionally set fire that caused an explosion is a huge concern to this community.” He also said that about $750,000 of damage was caused to Bar 5015, and there was collateral damage to nearby residences and businesses as well.

The Houston Fire Department says it is likely that some of the arsonists may have suffered burns or blast injuries due to their proximity to the bar when it exploded.

The loud boom and flash of the explosion on June 12 were captured in security camera footage. Thankfully, no one was in Bar 5015 the time, so there were no casualties.

Footage from ABC-13 showed that the strength of the explosion shattered the windows of Alfreda’s Soul Food just across the street. According to attorney John Nechman, a regular patron of the bar, his office about a block away also had two broken windows. In fact, he says the blast was so strong it moved around furniture and other items inside the office “considerably.”

“We love going there when it’s not busy, but it was packed to the brim that night,” he said. “There’s no scene in Houston like the one on Almeda between Turkey Leg Hut and Bar 5015. The crowd is very much like Turkey Leg Hut. It’s a friendly place. We like to go on Tuesday for steak night and sit on the patio with a couple of strong drinks. They remodeled and just reopened about a month ago. It has been packed to the gills since Day One. ”

The cocktail bar is popular with black and African American Houstonians and is in an area with other acclaimed, black-owned businesses, including Alfreda’s, Turkey Leg Hut and Davis. St. at Hermann Park. Bar 5015 owner Steven Rodgers was said to be in “disbelief” after the explosion.