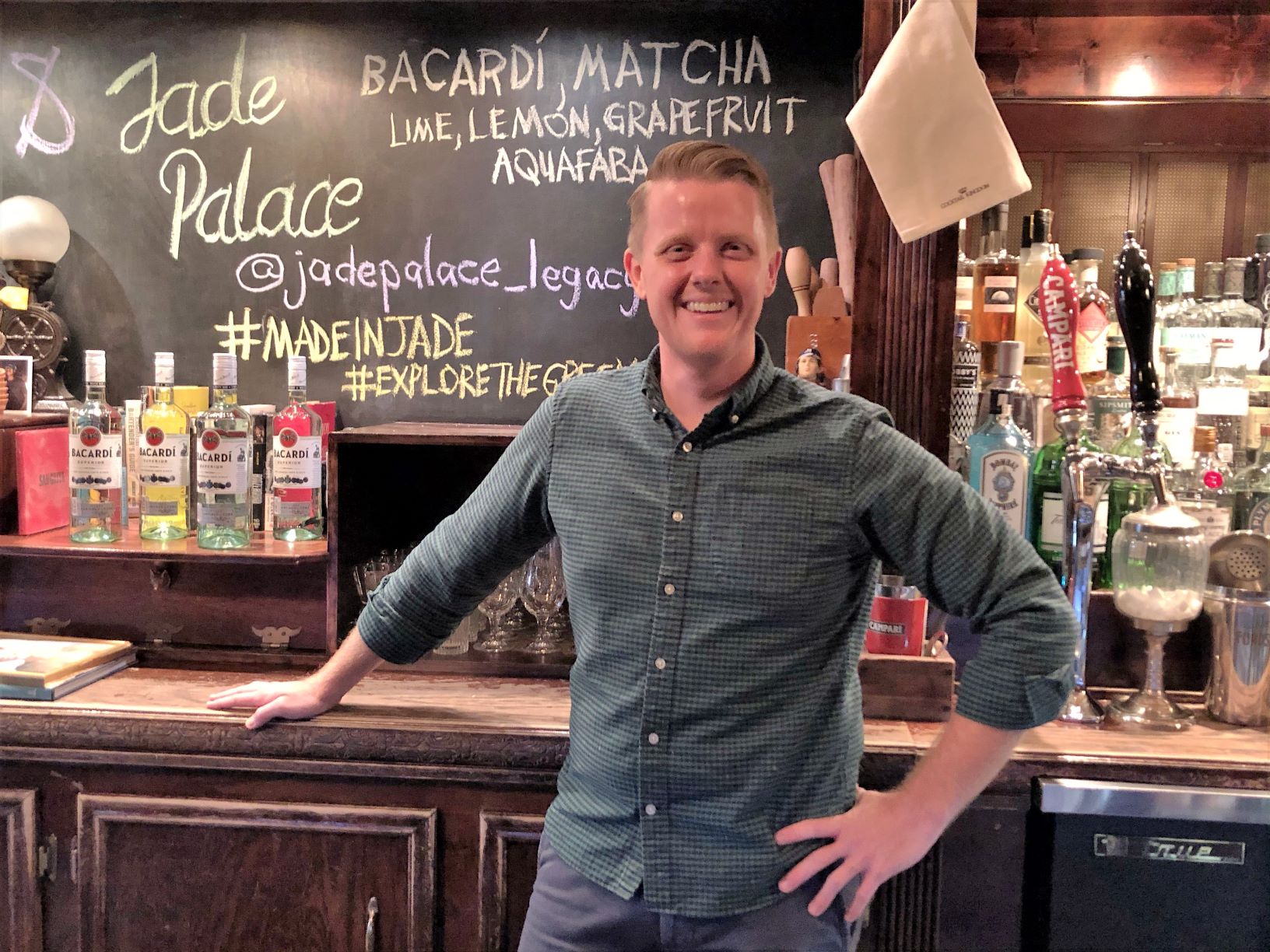 It’s fair to say that Kenny Freeman of Captain Foxheart’s Bad News Bar at 308 Main is one of Houston’s most enduring bartenders. It’s not the easiest profession, yet he’s been a familiar face for more than a decade at top establishments that also include Anvil Bar & Refuge and Julep. Now, he is representing Texas as one of 16 finalists competing in the annual Bacardi Legacy Cocktail Competition in San Juan, Puerto Rico. The competition, which starts on January 25, challenges bartenders across the United States to create a classic cocktail that will stand the test of time — something as iconic as the mojito. The winner is competing in the global final this May in Miami.

Freeman’s drink, Jade Palace, is currently being served at Bad News Bar, Tropicales, Julep and Coterie for $12. The vibrant green cocktail is made with Bacardi Carta Blanca, lemon, lime, matcha, aquafaba and hopped grapefruit bitters. You won’t find any fancy garnishes or straws in the cocktail, as Freeman is committed to a “less is more” approach when it comes to his drinks. He prefers to let the drink shine on its own.

The cocktail’s green color not only represents the name Jade, but reflects his commitment to being “green” within the beverage industry. “I’m really passionate about sustainable thinking and ways of bringing the food and beverage industry into a conversation about how we can make the world better through the choices we make,” says Freeman. “This beverage represents my journey to create new avenues whether it’s small touches like using aquafaba instead of eggs in drinks or figuring out ways to reuse ingredients so you’re not wasting as much.”

It is little changes like this that Freeman hopes will make a greater impact over time. He is so passionate about his cause that he works with new bartenders at Julep and Tropicales to introduce them to using aquafaba (chickpea liquid) as an emulsifier in drinks to provide the same fluffy effect as an egg white. Not only does this reduce egg waste and the possibility of food-borne illness, but it makes the drink vegan-friendly.

Each national finalist will make their drink for the judges during the live competition. Drinks must be rum-based and contain no more than six ingredients. Entries are judged in three main areas: The Legacy (cocktail name, inspiration, originality, replicability), The Drink (visual appeal, aroma, taste) and The Stage (performance, technique). Finalists are given two minutes to set up and six minutes to make and present two cocktails for the judges.

The final component of the competition is the cocktail campaign in which finalists are tasked with demonstrating that their cocktail will leave a lasting legacy. Freeman is promoting Jade Palace via Facebook and Instagram with the hashtags #madeinjade and #explorethegreen. In addition to several pop-ups around Houston, Freeman has collaborated with fellow competitors in Tacoma and New York to help promote each other’s cocktails.

Even with over ten years in the industry, Freeman is still relying on support from colleagues and the Houston Bacardi team, including Duane Fernandez, Bacardi Portfolio Ambassador for South Texas. For Fernandez, this is his fourth year in a row mentoring a finalist from Houston. “Kenny is following in the footsteps of Rebecca Burkhart (2017), Chris Morris (2018) and Zachary Churbock (2019),” says Fernandez. “However, there is something extremely special about Kenny which is beautiful to watch. His humbleness along with his likability factor is why he has delivered such an amazing Global Legacy cocktail.”

Freeman is hosting a free event on Friday, January 17 from 12:00 to 1:30 p.m. at Finca Tres Robles, 257 North Greenwood, to talk about sustainability and urban farming. There will be complementary samples of Jade Palace. The event is 21 and up, and registration is through Eventbrite.