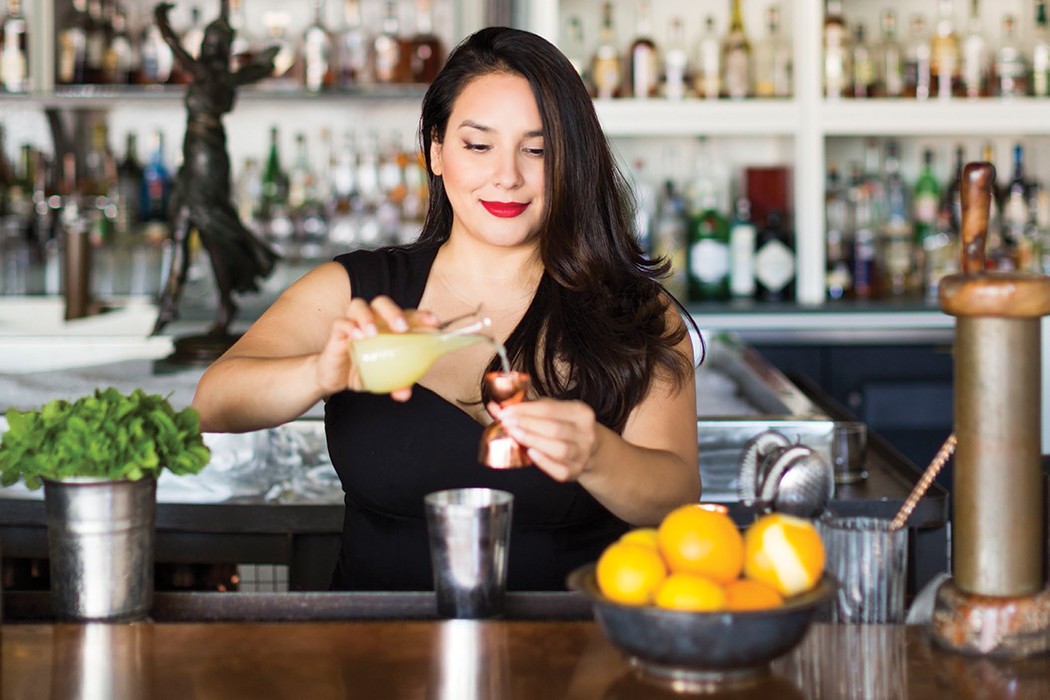 During her moving acceptance speech, Huerta, who immigrated from Mexico as a child, said, “Thank you to my city of Houston, Texas for loving immigrants. For loving immigrants like me, like my family, welcoming us, and giving us the path to opening our own businesses.”

The well-appointed bar, at 1919 Washington, focuses on infusing classic Southern cocktails with ingredients and flavors from Houston’s many immigrant communities. The results include cocktails such as the Tepache Julep, which combines sous vide pineapple wine, mezcal, maraschino raspberry and tamarindo to create a refreshing cocktail reminiscent of the classic Mexican fermented beverage made with pineapple rinds.

This creative approach has led to Julep also recently being named one of the Top 50 Bars in North America and being a finalist for the 2022 Tales of the Cocktail Spirited Award for Best U.S. Cocktail Bar.

In 2020, even though the nomination process had begun, and finalists were even being voted on, the James Beard Awards were cancelled due in part to lack of diversity among the candidates. Of course, the pandemic caused issues, too, with many restaurants and bars having to close temporarily (or permanently), reduce seating and rely more heavily on takeout. None of those factors help when it comes to evaluating hospitality businesses or professionals. So, there were also no James Beard Awards in 2021. During the two-year hiatus, the James Beard Foundation substantially revamped its award process, which resulted in a group of winners that were more reflective of the United State’s hospitality industry.

Clearly, the changes have helped. In addition to Huerta, the other two Chef and Restaurant winners in Texas are Edgar Rico, of Austin’s Nixta Taqueria, who won for Emerging Chef, and Iliana de la Vega, of Austin’s El Naranjo, who one for Best Chef: Texas, the first year this award was given (Texas was previously part of the James Beard Foundation’s Southwest region).

In addition, two Texans won Media Awards, which were awarded in a ceremony held Friday, June 11. “Taco Editor” José R. Ralat won for best Columns and Newsletters for his Tex-Mexplainer series in Texas Monthly.  Jesse Griffiths of Austin’s Dai Due won for best Single Subject Cookbook for “The Hog Book: A Chef’s Guide to Hunting, Butchering and Cooking Wild Pigs.”

The ceremony, which was held at Lyric Opera of Chicago, was an uplifting celebration of diversity and the hospitality industry’s resilience during the pandemic. Chef and author Kwame Onwuachi, who Houstonians might recognize as a guest judge in Top Chef: Houston, served as a lively host for the evening and wore a variety of fun jackets from formal to sequined.

Though Houston only walked away with one win, it was still a great awards season, as seven Houstonians nabbed a coveted James Beard finalist nod:

Additionally, there were a dozen semifinalists. Those not already mentioned above are:

Hopefully, Houston will be back in the mix next year for additional national award consideration, as well as for Best Chef: Texas. A Houstonian has not won a Best Chef award since 2017, when Hugo Ortega finally nabbed the prize after being nominated seven years in a row.