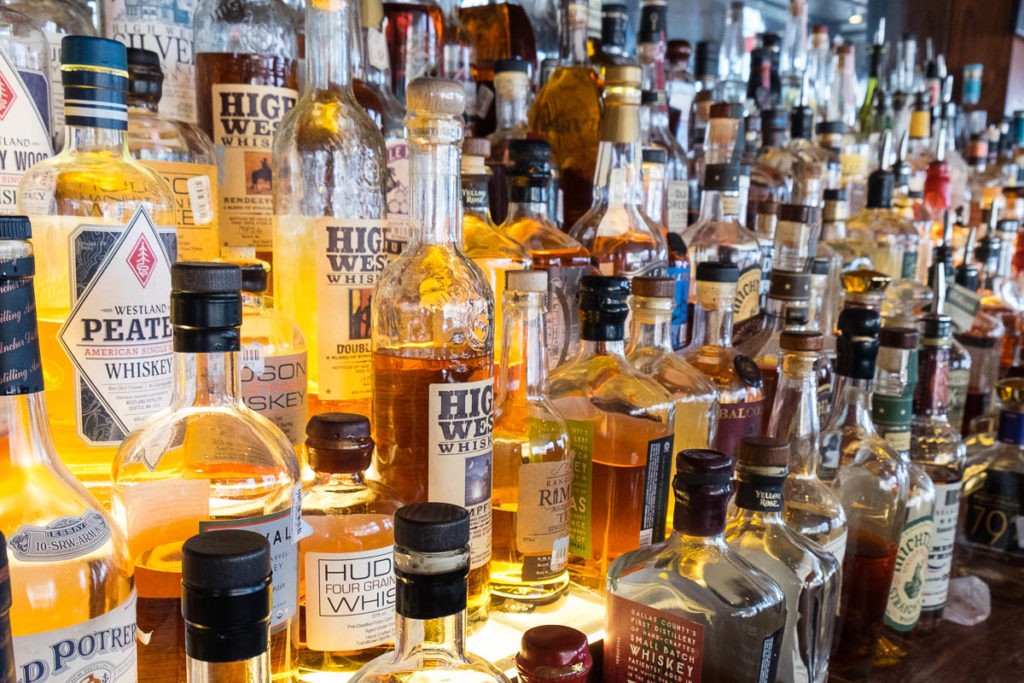 Just part of the extensive whiskey selection at Reserve 101. Photo by Phaedra Cook

Welcome to the first installment of Finder Favorites, our picks for classic establishments that we consider essential to Houston’s amazing restaurant and bar landscape.

If someone who lives in or near Houston says they love whisky and bourbon but hasn’t been to Reserve 101 yet—well, that claim is dubious. The bar itself, located in downtown, is modest but the collection of over 340 different kinds of whiskey, whisky and bourbon, certainly is not. Reserve 101 has made national headlines for obtaining some of the rarest and most limited releases in the world, most famously the Glenmorangie Pride 1978. By the time it was released, it had aged for 34 years and a one-and-a-half ounce shot sold for $750. That, though, was a rare situation and Reserve 101 certainly has plenty of affordable options on-hand.

Reserve 101 was established by Mike Raymond and Steve Long. The idea of opening a business together first came to them in 2001 when they were roommates. Quite surprisingly, the first viable idea not only had nothing to do with whiskey—it wasn’t even a bar! “Jeff Brooks, who has the Berryhill [Baja Grill] in Sugar Land was looking at opening one in Pearland. He wanted us to be owner-operators; we’d get an equity stake and would run the place,” said Raymond. “That ended up not happening but it started the gears rolling.”

“We didn’t know what kind of place we wanted to do, but we knew we had the drive and ambition to do it,” added Long. “Sitting at the bar, we were both drinking whisky and realized there were no whisky bars in Houston.” The closest thing, Raymond noted, was now-closed cigar bar Downing Street. He says that he had a feeling that whisky was the next big thing. He was correct.

Raymond and Long opened Reserve 101 in January 2008 with about 120 bottles and, at the time, that seemed like a huge number. America wasn’t yet in the throes of a renewed love affair with whisky and there weren’t nearly as many brands and expressions available then as there are now. To put the time period in context, Raymond pointed out that, at the time, My Space was the most-used social media platform. Twitter and Facebook were still being adopted by the masses. Houston wasn’t on the radar of national food and beverage media, nor did it have a “craft cocktail scene”—although that would soon follow.

The revival of craft cocktails and the resurgence of whiskey actually walked hand-in-hand. “The [cocktail bars] that opened were originally doing pre-Prohibition cocktails and wanted to be as authentic to those recipes. All those recipes called for rye whiskey so sales shot through the roof,” said Raymond.

Thanks to Reserve 101’s status as one of the premier whisky bars in the United States, “ambassadors” for respected scotch and bourbon brands regularly host tasting events at the bar. These are terrific opportunities for people to broaden their horizons and learn more about whiskey. Tickets are usually only $20 and the owners donate one hundred percent of the proceeds to Lucky Dog Rescue, a non-profit organization.

Reserve 101 is best known for its whiskey collection and yet there’s a well-crafted cocktail program that deserves more attention than it gets. In addition, it was surprising to hear that there are also over 50 different kinds of beer. “We’re more than whiskey!” declared Raymond. “It’s really tough to be a world-class whiskey bar and promote that fact, but then some people don’t come in because they think you only have whiskey! We have wine, too.”

Back to those cocktails, though: Reserve 101’s happy hour runs from when it opens at 2 p.m. to 6 p.m. Select drinks on the menu are $6 each and include ultra-classics like the Old Fashioned and the French 75. Well-considered originals include the lovely, sunset-hued Black Barrel Black Eye, with Jameson Black Barrel whiskey, Campari, vanilla vodka and lemon juice, as well Now On The Main Stage with Brooklyn Gin, dry vermouth, Fernet Branca, simple syrup and cherry bark bitters served over an ice sphere and garnished with a twist of orange.

Reserve 101 was barrel-aging cocktails long before it was trendy and some current selections include an aged Negroni and Get Off My Lawn, a bottled cocktail for two with Monkey Shoulder Scotch, Aperol and Drambuie.

Raymond says Reserve 101’s biggest challenge has been its location, which is 1201 Caroline at Dallas Street. It’s a street corner that’s been constantly plagued with construction and that can make finding nearby parking a challenge. That said, it’s not difficult to find a nearby pay lot or garage. (We’ve had success more than once during the week finding street parking on Polk.)

Raymond and Long says that, despite the success they’ve had with the whisky bar, they are most proud of watching seeing staff members grow in their careers. Raymond elaborated: “To [employ] people in their early 20s and see them become adults and have families—that, to me, means more.”