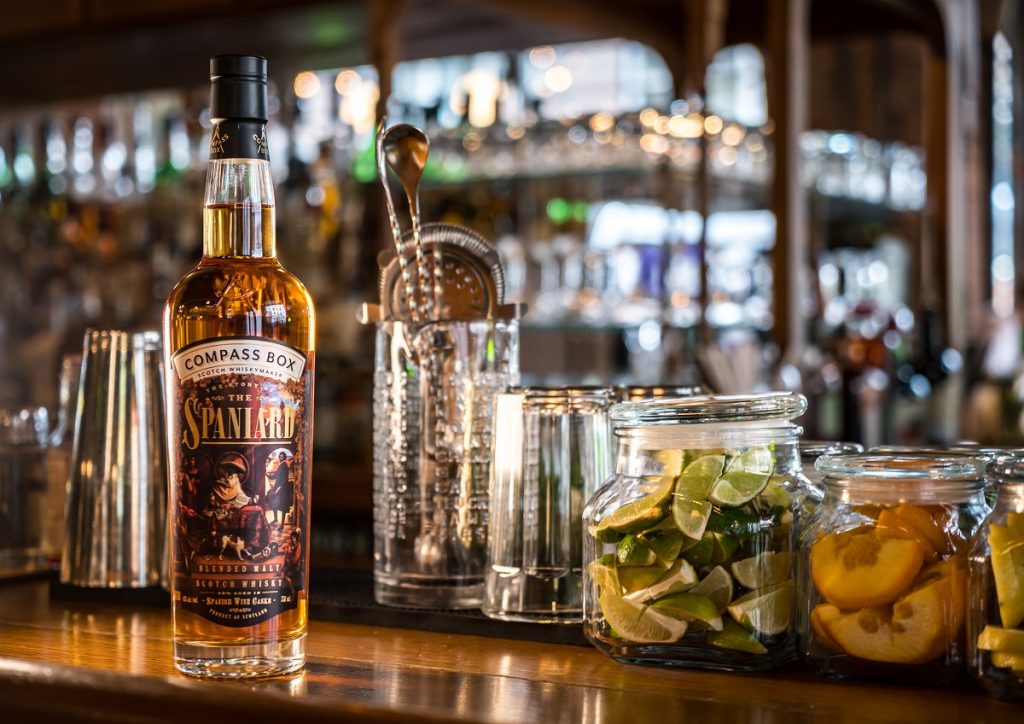 The Story of the Spaniard is now available nationwide. Photo by Noah Fecks

Scotch whisky brand Compass Box is kicking off a five-city tour in Houston on Thursday, November 7th at 7 p.m. in Houston at Justin Yu and Bobby Heugel’s Penny Quarter, located directly behind Anvil Bar & Refuge at 1424 Westheimer. It’s to celebrate the first anniversary of The Story of the Spaniard, a blend that’s been aged in sherry and red wine casks. Teaming up with the brand is bar talent from Mikey McFerran’s appropriately named NYC whiskey and cocktail bar The Spaniard.

Compass Box founder John Glaser named the whisky after a man he encountered in Spain, where he was introduced to sherry for the first time. Drawn to the rich, deep flavors, Glaser became immediately infatuated with the style.

McFerran and his traveling bar team is showcasing The Story of the Spaniard by serving it neat, on the rocks and also in a few cocktails. There’s a Manhattan with Amaro Averna and a highball with Topo Chico and lime juice, but I’m looking forward to ordering a Fast Buck — a mix of Story of the Spaniard, lime, ginger, Pedro Ximénez sherry and Compass Box Peat Monster (which isn’t nearly as peaty as the name makes it sound). Early arrivers will also be able to taste the original bespoke batch created for The Spaniard.

There’s no cost of entry to attend the takeover. The only cost is the price of the cocktails plus a tip for your hardworking bartender. It’s worth noting that Penny Quarter usually focuses on wine and coffee in place of cocktails, but there is a selection of spirits behind the bar for enjoying neat. Penny Quarter’s wine, coffee and food menus can be viewed online.

After Houston, the bar takeover will also travel to Washington D.C., Louisville, Chicago and Miami. More information about the whisky is available on the Compass Box website.

Riel is hosting a five-course Compass Box whiskey dinner on Wednesday, November 7th. Enjoy mushroom empanadas, maple porkloin and sticky toffee with fois gras torchon while sipping on spirits and cocktails. Tickets to the 7 p.m. dinner are $80 plus tax and gratuity and reservations can be made by calling (832) 831-9109.

Houston Food Finder with Roma Ristorante.3 hours ago
As always, Roma Ristorante is participating in Houston Restaurant Weeks 2021! Journey to Italy with a three-course dinner for $35 per person. Three dollars from each goes to the Houston Food Bank. Selections include vegetarian and gluten-free dishes. Choose from starters such as creamy Imported Buffalo Mozzarella With Housemade Pesto And Mixed Greens, crispy Fried Shrimp And Calamari With Marinara And Artichoke Sauce and hearty Meatballs With Cheese And Basil. The second course includes pasta options like spicy Orecchiette With Housemade Italian Sausage (a specialty of Chef Scarafile) and Strozzapreti with Fresh Shrimp and Housemade Pesto. Entrées include earthy Eggplant Parmigiana, Chicken Breast Stuffed With Prosciutto And Grana Padano and decadent Veal Scaloppine. Pair your meal with a selection from our extensively curated wine list. Reservations are encouraged but not required. Visit the https://romahouston.com/ for the full menu, or call (713) 664-7581 for more information.