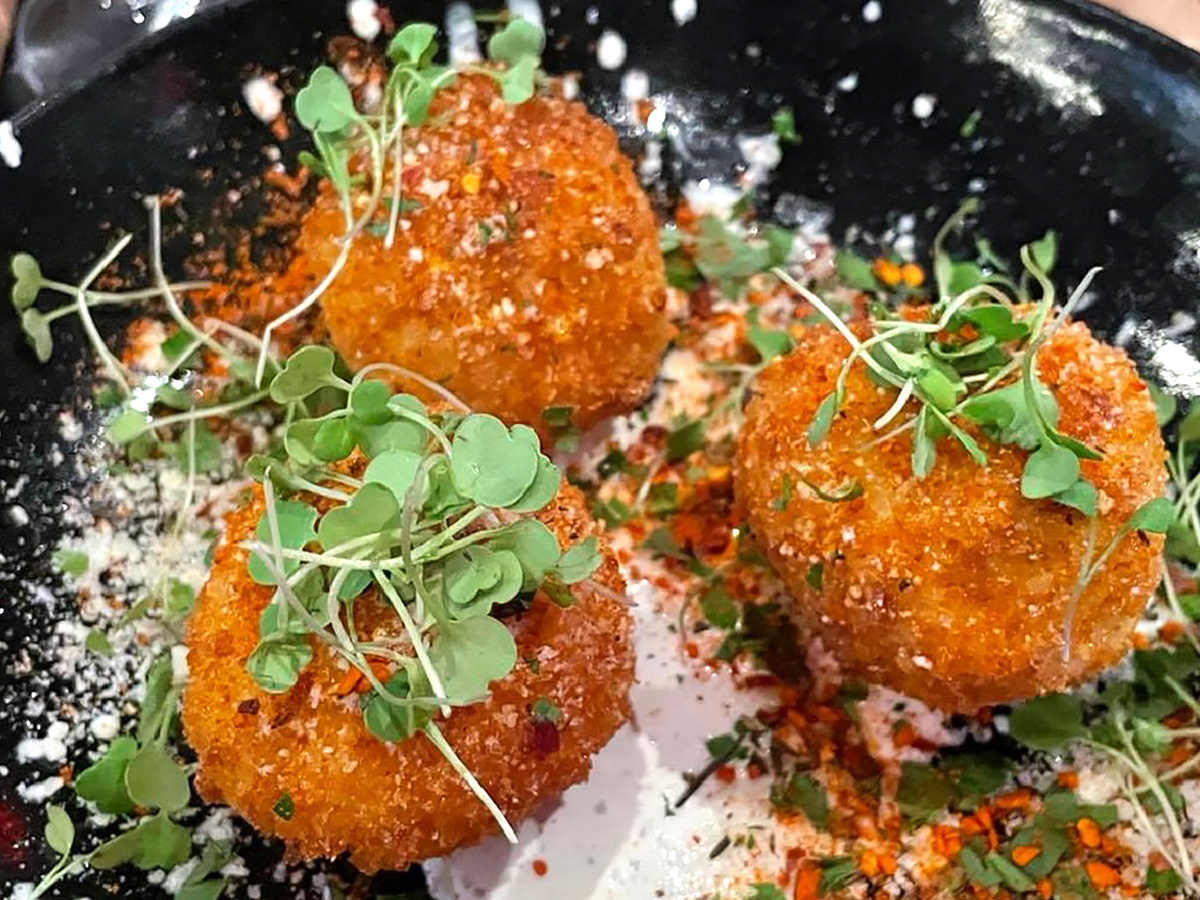 Located at 1801 Binz, City Cellars HTX, a wine-centered restaurant, now occupies Dak & Bop’s original home in the Museum District. (Dak & Bop still has a location on 18th.) Initially a catering and party business, owner Daniel Wolfe pivoted in response to a lack of public events at the time, due to the COVID-19 pandemic. The restaurant invited Houston Food Finder to visit the restaurant, meet chef Antonette Wright and try some of the offerings.

The space is small, cozy and full of personality.  Each wall has its own style. The largest wall features a mesmerizing mural of Houston’s skyline and the “Be Someone” bridge. Another displays an array of vines with a continuously filling shadow box of corks. Somehow, they all work in an eclectic sense. All of the tables are made from resin and reclaimed wood. Even then, Wolfe says that there are more design plans in the works. He also says another of his goals is to highlight local, LGBTQ+ and minority-owned businesses, especially beverage producers.

My meal at City Cellars was one of the best I’ve had this year, but have some patience when you visit. Ever since the pandemic, many restaurants have struggled to attract and retain employees, and, as evidenced by both my observations and some consumer reviews, that seems to be the case here. The night of our visit, our waitress also served as a hostess and bartender. Even with all of the responsibilities, she was knowledgeable and offered friendly service, while showing sincere excitement when offering recommendations. For his part, Wolfe circulated the room most of the evening, personally checking on his guests.

The food at City Cellars has a mostly-upscale plating style, while still allowing for whimsy in several of the dishes. The Sriracha Mac N’ Cheese Balls is a popular appetizer that exemplifies the fun. A crisp panko crust encases each soft, gooey mound of cheese and fresh macaroni locally sourced from Della Casa Pasta in Tomball. The sriracha heat is not intense, but there’s a hint that lingers for a moment. Other appetizers on the menu include Wine-Infused Brussels Sprouts and fried green tomatoes.

Wright has been in charge of City Cellars’ kitchen for a year. She took over after interning for Disney World and then working at a few hotels and country clubs. Wright presented our entrées. While it’s rare to feel comfortable eating in front of the chef who prepared your food, Wright’s friendly confidence in her work made it feel like eating with an old friend.

When the bone literally fell off the generously sized braised short rib, Wright joked that “the knife is just for show.” She was right; the beef was so perfectly cooked that a fork was the only utensil needed. The short rib was covered in beef demi glacé and rested atop a bed of gouda-laced grits.  At the same time, Wright delivered a plate of bacon-wrapped scallops with crab risotto, asparagus and sweet corn purée. Like the short rib, the scallops were cooked to perfection. Impressively, despite the number of components to the dish, none of the flavors overpowered the others. The latest menu isn’t posted online yet (Wolfe says the City Cellars HTX website is being redone), but other entrées include Chilean sea bass and Reverse Chicken Parmesan, a chicken breast stuffed with herbs and cheese.

Sides include Parmesan Truffle Risotto, grilled asparagus and garlic mashed potatoes, but the Seafood Mac ‘n’ Cheese came so highly recommended that it was impossible to pass up. The version at City Cellars is saucy yet light on the cheese, which lets the crawfish and lobster do most of the talking — another display of Wright’s spot-on execution. For dessert, the restaurant offers only a few, including molten lava cake and key lime pie.

A name like City Cellars sets high expectations of the wine selection. The list is not lengthy, but the choices are unique and surprisingly reasonable. I asked Wolfe for a recommendation, and after some unusual questions on my day-to-day eating choices, he pinpointed an excellent red blend from the AXR winery.

The cocktails are interesting but could use some work. Several drinks celebrate diversity, incorporating craft spirits from minority-owned businesses such as the Cellar Old-Fashioned made with Uncle Nearest. (You can learn more about this Black-owned whiskey brand in our prior article about it.) However, the drink list also showcases big brands in cocktails like the Casamigos Berry Screw’d. The tequila brand was founded by actor George Clooney and friends, and they sold it to spirits giant Diageo in 2017 for $1 billion.

City Cellars HTX clearly has a few kinks to work through, but we’re looking forward to what happens afterward. Even now, the environment, wine selection and Wright’s culinary mastery and pleasant demeanor make for an enticing experience that’s well worth a wait.