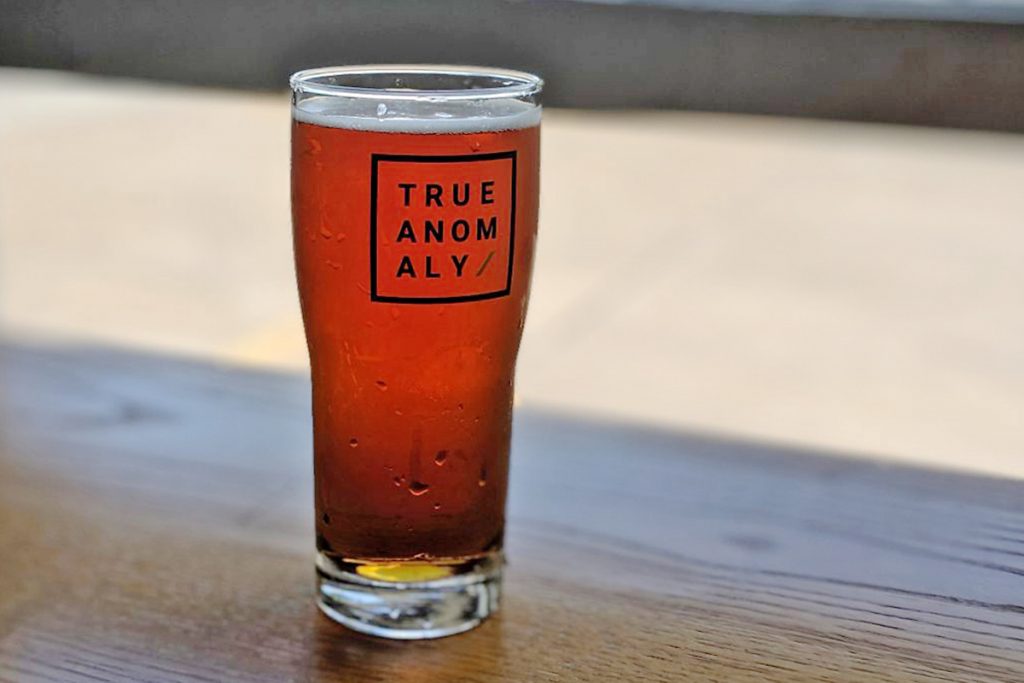 True Anomaly Brewing, the latest addition to Houston’s craft beer and EaDo bar scenes, opened its doors at 2012 Dallas this past February. Since then, it has garnered attention for its elegant, fruity, and sometimes salted sour beers, as well as its contemporary space-age aesthetic.

On an uncharacteristically pleasant Sunday afternoon in September, we stopped in for some beers and board games to see if this NASA-themed brewery lived up to the buzz.

Houston’s craft-brewery landscape hasn’t yet reached the per-capita saturation of the country’s definitive beer towns (Boulder, Asheville, Ft. Collins, etc.). However, these days a fairly thorough brewery tour of Houston would take at least a three-day weekend to accomplish (safely). It’s easy to imagine that some brewery fatigue may have set in and that many will shrug at yet another brewery opening. But True Anomaly may be the glass of sudsy adrenaline that Houston needed to break the monotony.

From outside, the small warehouse building with matte black paint accented by lime green stripes looks like it could be EaDo’s latest CrossFit gym or tech startup — if not for the name painted boldly on the side.

Inside, a clean, contemporary-industrial decor is bolstered by chrome-finished fermentation tanks that stand behind the bar. Complete with NASA posters and a sci-fi color palette, the vibe is definitely space-age, even without knowing the meaning of the name or the founders’ story. True Anomaly is a space exploration term, an equation used to find the position of a satellite in orbit. The company’s four founders met while interning for NASA and dedicated both their brewery’s name and core values to the notion of pushing boundaries.

With an eye on wild and sour beers, True Anomaly crafts ten refined, meticulously brewed selections that range from tart and refreshing to bold and boisterous. My personal favorites are Truffula and Callisto — both fruited sours. The former is a mango and passion fruit sour blend that is as refreshing as it sounds. The latter is a more tempered pink guava sour with a crisp, salty finish.

Most of the menu is suited to Houston’s eternal summer with brews such as light and nutty pale ales and a Belgian trippel with wonderful floral notes. For the brief moment each year when winter wear is appropriate — or for those who wear black jeans in July —  there is a chocolate and raspberry imperial stout, which is a rich, malty dream.

While True Anomaly does not currently offer food, there are food trucks that are usually parked beside the patio on weekends. Additionally, Vinny’s Pizza, Rodeo Goat, SeaSide Poke and Indianola are all within a block of the supremely well-positioned brewery.

Any brewer willing to open a small craft brewery two blocks from the popular 8th Wonder Brewery is either out of their mind or profoundly confident in their beer. The folks who own True Anomaly seem to fall into the latter. Their selection is not only exceptional, but thematically and creatively miles apart from anything happening down the road. The uniqueness of True Anomaly’s brews carves a space for it to shine and grow, even in a city with dozens of established competitors.