Hike Your Way to Buffalo Bayou Brewing Co. for the Food, the Beers and the View 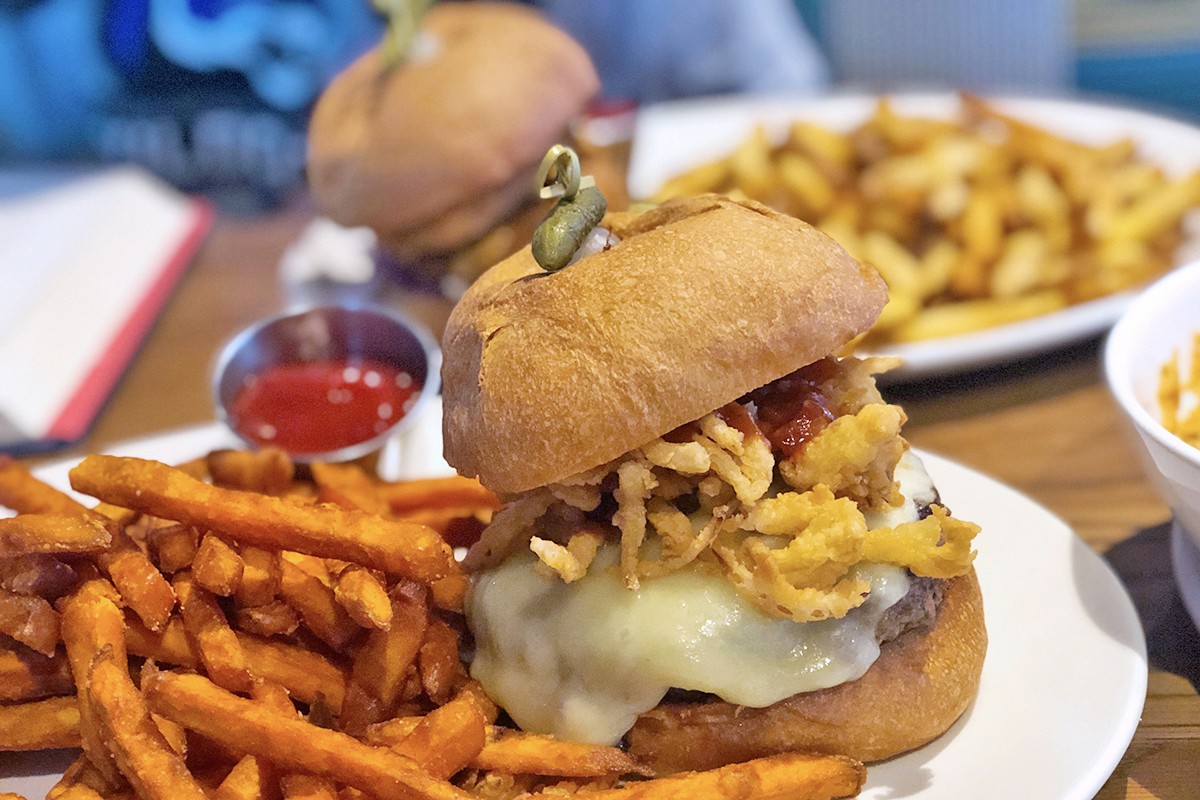 On a warm winter day — one of those days that makes our long, steamy summers worth it — my daughter and I hiked through the Houston Arboretum to a high bank overlooking Buffalo Bayou. After our hike through a brambled, wooded landscape resembling what downtown looked like when the city was founded in 1836, we were tired and hungry. So, we headed to Buffalo Bayou Brewing Co.’s new brewery, tap room, and restaurant, which recently opened at 2101 Summer Street.

With its garage-door windows rolled up and epic views of downtown’s skyline, the second-floor restaurant was a near perfect place to round out my daughter’s last day of winter break. It also highlighted that Buffalo Bayou’s new facility is not just the taproom of one of Houston’s first craft brewers but that it is also a useful neighborhood restaurant.

Sure, serious beer enthusiasts should make the trek, but its location in the Arts District, between the Heights and downtown, makes it convenient for area residents, gallery hoppers and the downtown happy-hour crowd. Since it’s just minutes from the theater district, has lots of parking and is open early and late, it’s also a great spot for a casual pre- or post-performance meal.

Adding to the brewery’s utility is a menu of well-executed standards such as burgers and pizzas, and innovative takes on pub fare like the Smoked Birria Quesadilla, prepared by former Beaver’s chef Arash Kharat and his team.

On our first visit, we opted for the basics: a chicken sandwich and a cheeseburger — the Smokehaus Burger to be exact. In a town blessed with many great beef patties, Buffalo Bayou’s may not make it to the final bracket in a citywide competition but it would definitely be in the final rounds. The thick 44 Farms patty, blanketed in melted white cheddar and piled high with fried onions, more than satisfied my post-hike hunger.

However, the star of that visit was the Buttermilk Bird: a tender buttermilk-brined chicken breast fried to elemental crispness and resting in a pillowy bun. The roasted garlic, za’atar flatbread that accompanied a red pepper hummus was a close second. The hummus itself could use a little more zip — a drizzle of good olive oil, a squeeze of Meyer lemon juice, or maybe some cayenne — but the flavorful, perfectly crisp, cracker-thin flatbread elevated the combo well above the two-story stainless steel fermentation tanks on view from our table. The flatbreads were good enough to order again on our second visit.

The pizzas are also worthy. Using the same yeast the brewers use for the beer, Kharat ferments the dough for 72 hours before the crusts are fired in a wood-fueled oven, producing a well-executed, airy texture, — akin to Neapolitan-style — that has a crisp outer layer and a chewy center. Choose from eight topping combos, most named after a Houston-area neighborhood. We opted for The Montrose: excellent housemade Italian sausage, roasted mushrooms, mixed herb pesto and pickled jalapeños. Though the herbal snap of the sausage was a little overwhelmed by the other ingredients, we ate the whole pizza and plan on going back to try another. Other intriguing topping combos include the Double Pepp with housemade pepperoni and cold-smoked, cured brisket and Smoke on the Bayou featuring smoked short ribs.

In fact, there are many other dishes on the current menu that sound intriguing enough for a return trip, including the Smoked Texas Philly with smoked 44 Farms chuckeye melded with 1836 boozy onions and beer cheese; the BBQ Chicken Sammie, shredded, smoked chicken topped with fried onions; and Duq-itos made with duck confit, mole, crema and queso fresca.

Though the restaurant is worth visiting for the food alone, it is a brewery, so it would be remiss to not to mention the beers. The taps include 1836, the crisp, copper ale that launched Buffalo Bayou Brewing Co.; Sam’s Daily, a session ale; and the well-balanced Crush City IPA. However, they also offer a rotating selection of Buffalo Bayou’s more creative brews. On my most recent visit, I enjoyed Tropikal, a fruity sour, and Red Velvet Stout, a smooth salute to dessert. For those who just want to explore the beer selections, you can saddle up to the first floor bar or head up to the rooftop beer garden on the third floor.

With its massive wooden, patchwork, buffalo head-shaped entrance, Buffalo Bayou has managed to successfully straddle the line between destination-worthy brewery and useful neighborhood restaurant. I foresee many more evenings enjoying pizza, beer and the lights of Houston’s skyline.

Buffalo Bayou Brewing Co. is open 11 a.m. to midnight Sunday through Wednesday and 11 to 2 a.m. Thursday through Saturday.