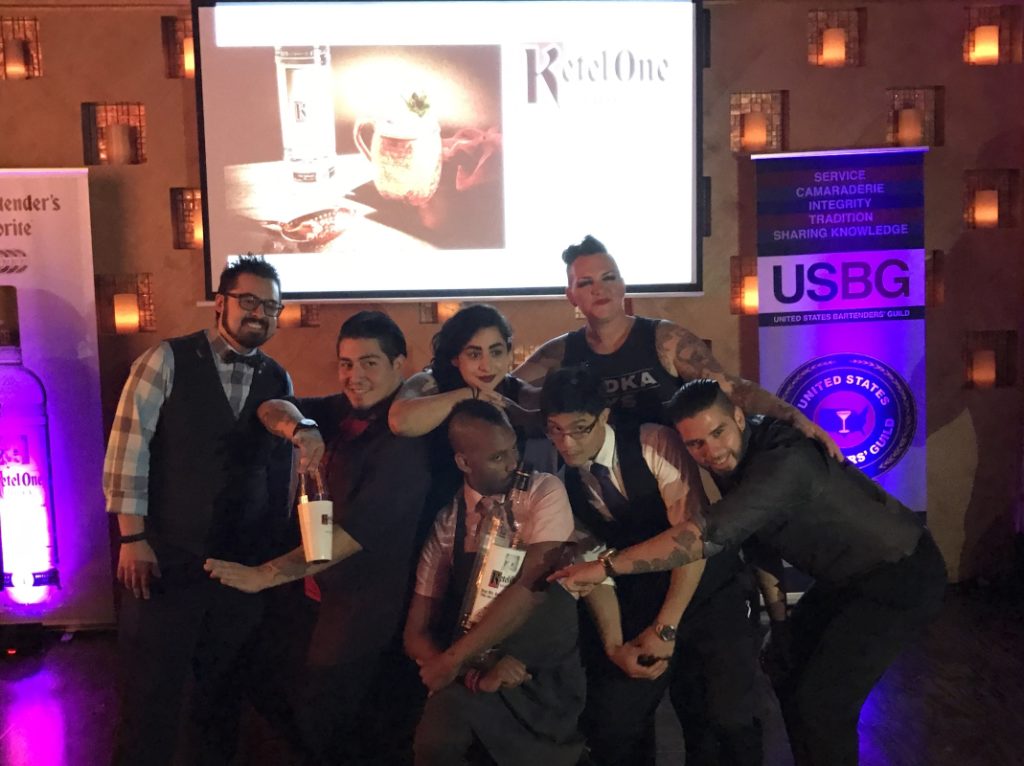 Monday night, Ketel One joined with Rose Gold Cocktail Den to host the Texas Heritage Master of the Mule competition, pitting seven Houston bartenders against each other to see who could create the most creative cocktail. Houston Food Finder was asked to help judge, along with chef Michael Pellegrino of Slow Dough Bread Co. and Johnny’s Gold Brick general manager Justin Ware. The first and second place winners will now go on to represent Houston in the Ketel One statewide competition in Dallas. All of the entries, though, exemplified high-level creativity. Read on to find out what was entered and which ultimately won.

Traditionally, mules are made with vodka, ginger beer and lime juice, then served in a copper mug. However, Ketel One ambassador and emcee of the evening Jacob Fairchild explained that instead of creating traditional Moscow Mules, contestants were asked to draw inspiration from their heritage and culture. Chris Deas of Nick’s Fish Dive and Oyster Bar went to the West coast with citrusy California oranges in his “Dual Residency” mule. He also included Dutch chocolate in honor of his new Dutch father-in-law. The addition of mint reminded some in the crowd of Christmas, a pleasant surprise on a warm Houston evening.

Jose Gil of Brasserie du Parc shared his Up in Smoke mule, explaining that while he was never a fan of the smoky cocktails that his family enjoyed, years of being behind a bar converted him. Gil’s blend of Ketel One with smoked cardamom, homemade cardamom simple syrup and Topo Chico and created a very smooth, subtly smoky mule.

Patrick Abalos of SideBar at the Westin at the Woodlands had a drink with quite a unique name: Casserole Meets a Mule. It combined Ketel One, ginger liqueur, sweet potato, piloncillo puree, lemon and ginger beer to create his tribute to his favorite family holiday dish: pumpkin pie. Garnished with a large homemade toasted vanilla marshmallow, it was like sipping pumpkin pie, too. The communal thought of the judges was that we didn’t want to like it, but couldn’t help going back for another sip.

Ryan Perry of Brasserie du Parc created the El Batallon: A Dynomule Shandy. Named after the rowdy group of Houston Dynamo fans, Perry pushed the limits by adding ginger citrus IPA instead of ginger beer to Ketel One Citroen, along with lemonade and mint. The hops from the IPA worked well with the lemonade and Citroen vodka, but Perry fell just short of placing in the competition.

Warning the judges that she was, “just a bartender, not a public speaker,” 10-year industry veteran Sarah Tompkins Gutierrez of JR’s Bar & Grill let her drink do the talking instead. Her cocktail, named Sarah Unicorn, combined Ketel One Oranje, homemade blood orange nectar and Fever Tree Ginger beer to create a no-frills mule. Gutierrez admitted being nervous but performed admirably, taking home the People’s Choice Award and receiving a loud applause from the crowded bar.

Edwin Hui of Stones Throw showcased his Chinese heritage while paying homage to his wife’s love of Thai chili peppers with his Jade Dragon Mule. Hui combined Ketel One, homemade celery syrup, lime juice, homemade “Dragon Fire” tincture and Fever Tree Ginger Beer to create a pleasantly spicy and fragrant mule. Garnished with a buzz button (a Sichuan flower that tingles tastebuds much like Sichuan peppercorns), the cocktail took on new life on subsequent sips. Carbonation from the ginger beer and capsaicin from the Thai chili peppers were exacerbated, leaving the judges thirsty for more. Hui landed second place and will advance to the State competition later this summer.

Taking home coveted first place honors, though, was Marla Martinez of Etoile Cuisine et Bar. Claiming that the roasted beet juice, lemon and ginger of her Mule & Earth cocktail would cure fevers and sore throats was intriguing (who doesn’t want to think cocktails are actually healthy?) In case all else, failed, the drink included a hearty dose of Ketel One. The deep red cocktail garnished with a green sprig of rosemary was gorgeous, and also flavorful with the ginger, lemon and mild, earthy beet flavors.

Both Hui and Martinez advance to the State competition in mid-June, where they’ll be joined by winners of regional contests in Dallas and Central Texas, both being held in mid to late May.

By the way, there are a few other bartenders representing Houston on a national level soon: Mariano Gill, Patrick Abalos and Justin Ware will compete in the USBG World Class Southwest Regional competition on May 2nd in Oklahoma City.