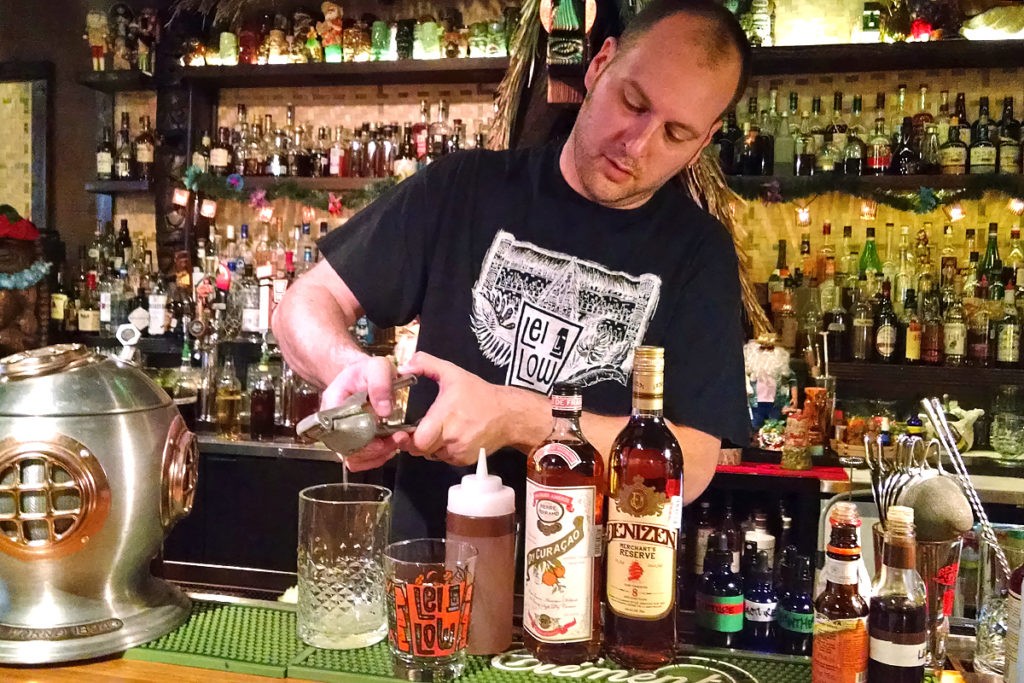 Russell Thoede of Lei Low squeezes fresh lime juice into a mixing glass while demonstrating how to make a classic Mai Tai. Photo by Holly Beretto

There are many interpretations of the Mai Tai, but few bars are as dedicated to making it as close as possible to the Trader Vic’s original as Lei Low, the tiki bar located at 6412 North Main in The Heights. We asked owner Russell Thoede to walk us through the history of the Mai Tai and how it should be made.

The tiki craze might have started when Ernest Gantt, aka Don the Beachcomber, opened his eponymous bar in Hollywood in 1934, but it was Victor Bergeron, aka Trader Vic, who created one of its most iconic drinks. The Mai Tai was born in 1944, seven years after Vic opened his own Polynesian paradise in Oakland, California.

The way Trader Vic told the story, he dreamed up the rum-and-juice concoction one day when some friends were visiting from Tahiti. Upon tasting it, one of them exclaimed “Maita’i roa ae!” which roughly translates as “Out of this world!”

Rumors swirled for decades that Vic ripped off the recipe from Don, but Vic proclaimed forcefully that the drink was his and his alone, going so far as to telling The New York Times, “I want to get the record straight—I originated the Mai Tai. Anybody who says I didn’t create this drink is a stinker.”

However, Thoede says that someone who wants to make an original Trader Vic’s Mai Tai is going to have a tough time. “Vic was using 17-year-old Jamaican rum, and you can’t really get that anymore,” he explained. “Even Vic wound up switching to a 15-year-old rum. We blend half Jamaican and half Martinique rum in ours.”

Thoede says he looked up the Mai Tai in Webster’s dictionary and found the definition reads, “a cocktail made with rum, curacao, orgeat, lime and fruit juices.” That’s not quite right. Vic’s Mai Tai never had multiple fruit juices, only the lime, and Thoede says an important part of making the drink is hand-squeezing the fresh lime juice. Here’s the recipe:

Squeeze the lime juice into a shaker, and save the husk. (“Some people will shake the drink with the husk,” says Thoede. “We don’t do that.”) Add the half ounce of orgeat, an almond syrup that you can buy at any fine liquor store (Lei Low makes their own), and the half-ounce of curacao. Add the two ounces of rum. Shake over crushed ice until blended, then into a rocks glass.

“It has to be crushed ice, not cubed,” says Thoede. “So, if you don’t have an ice crusher or you don’t go buy [crushed ice from] somewhere, get ready to take out a towel and hammer and bang your ice.” He says the crushed ice chills the drink faster and also waters it down less than cubed ice would.

Add the lime husk to the drink, then garnish with a pineapple slice, maraschino cherry and a sprig of mint.
“The Mai Tai is always garnished with mint,” Thoede stresses. He also says it’s “one of the best platforms for rum. You can play around with white and dark, aged rum, even light rum.”

Want to taste it for yourself? On New Year’s Eve, Lei Low’s menu will feature several of Trader Vic’s classics, including the Mai Tai, Scorpion Bowl and (this writer’s personal favorite), Menehune Juice.

“We’re going all out. We’ll have Trader Vic’s glassware, his swizzle sticks, the whole thing,” says Thoede. “It’s our tribute to this tiki godfather.”