A Preview of Forthcoming Houston Tiki Bar The Toasted Coconut 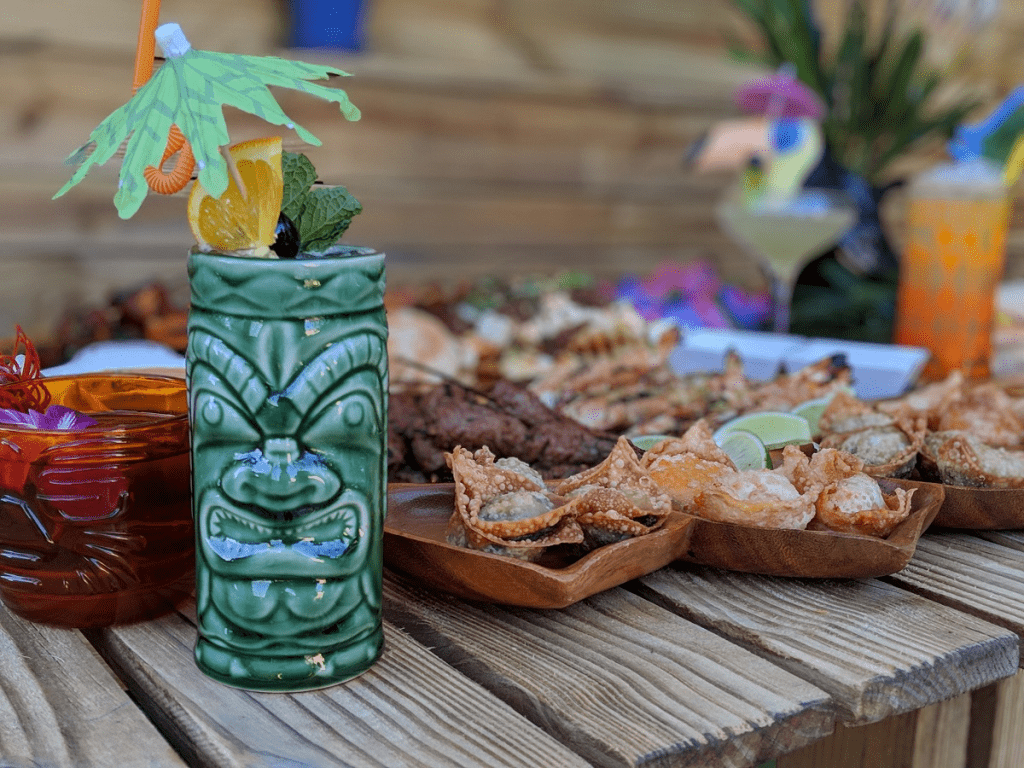 The Toasted Coconut is going to offer full food and drink menus. Photo by Josh Armendariz

Last August, Eater Houston broke the news that Nobie’s owner and executive chef Martin Stayer was working on a new project called The Toasted Coconut at 1617 Richmond in the former Maria Semla location in Montrose. Details had not been officially released at that point, but now everyone can get a taste of what’s going to be offered. The Nobie’s team, including sommelier (and Martin’s wife) Sara Stayer and bar director Sarah Troxell just started hosting Toasty Tuesdays — previews of what’s to come when The Toasted Coconut opens its doors this June. The first one happened earlier this week and more are planned. (Note that not every Tuesday is a Toasty Tuesday.)

Houston already has a few premiere tiki bars, notably Lei Low and the recently opened Kanaloa, but The Toasted Coconut is going to be distinguishable from the pack in a few ways. First is a bright, warm and welcoming design as opposed to the more traditional, darker environment. The famed Maria Selma palapa was only days away from being torn down before Stayer signed the lease, and the team is very excited that it was saved. The decor will be tropical and beachy, with a ’60s and ’70s art deco vibe and tiki records playing in the background. There is even going to be an adult sandbox designed to make patrons forget they’re in the fourth largest city in the nation.

Another difference is that The Toasted Coconut will have a full kitchen and a wide range of inspiration. “Thailand, Vietnam — basically if it touches the 20th parallel, we’ll work it into the kitchen” says Stayer, as he delivers dishes like the Indonesian “queso” with roti — crispy housemade roti with sweet curry sauce designed to look like chips and queso, and Crispy Rice Salad, a Vietnamese-inspired salad with discs of crispy rice accented with just enough fish sauce to please the palate.

Stayer is also featuring food served on a stick. For the first Toasty Tuesday, he made a trio of skewers — tender Sichuan Cumin Beef, Chili Garlic Shrimp and a wonderfully succulent Reverse al Pastor in which large pieces of pineapple are marinated as al pastor overnight and then grilled to flavorful juicy perfection.

The food options are going to help patrons can enjoy more than one of Troxell’s beautifully balanced tiki drinks. The drink list includes classic cocktails such as the Mai Tai and Planter’s Punch, but there are also remixed versions and plenty of Troxell’s own creations. At the preview, she played with standard spirits such as overproof Jamaican rum and rhum agricole — a Caribbean rum distilled from fresh sugarcane juice instead of molasses. She also flexed her mixologist muscles and created drinks from Japanese gin and a smoky blended scotch.

Nobie’s is known for its constantly revolving food and drink menus and Troxell’s daily cocktail specials. The Toasted Coconut’s offerings will be more stable, with menus changing only quarterly (which is still more frequently than many bars and restaurants).

There are more Toasty Tuesday previews planned for the future. Watch the Nobie’s and The Toasted Coconut’s Facebook pages for date announcements.

Houston Food Finder4 days ago
ICYMI: Cinco de Mayo celebrations are a go in Houston as local restaurants and bars plan parties of all sizes. Find your fun with this list from Ellie Sharp.

Houston Food Finder4 days ago
The ever-expanding restaurant empire from Ronnie Killen boasted a new address with the opening of Killen's BBQ in The Woodlands in January. Locals can now skip the drive to Pearland to stock up on smoked meats, fan-favorite sides and decadent desserts. Writer Ryan Kasey Baker shares more about what to expect from this latest outpost, and why the sweets are superb.

Houston Food Finder4 days ago
Chill out with goodies from the forthcoming Brooklyn-based ice cream shop Van Leeuwen Ice Cream, which is opening doors to its Houston parlor this week. Learn more about the exclusive local flavor plus opening day festivities from Phaedra Cook below!

Houston Food Finder1 week ago
Margaritas, mariachis, munchies and more await revelers during this year's Cinco de Mayo celebrations. Houston restaurants and bars are hosting an abundance of parties from intimate dinners to larger gatherings (pandemic restrictions are in place at most locales noted here). Find your fun with this list from Ellie Sharp.

Houston Food Finder1 week ago
Mother's Day is on May 9th, and Holly Beretto has compiled a list of choice Houston restaurants offering everything brunch this Mother's Day. Where will you be dining with Mom this year?
#houstonrestaurants #mothersday2021 #houstonmothersday #houstoneats

Houston Food Finder with Harold's Restaurant, Bar & Rooftop Terrace.1 week ago
Celebrating Mother's Day at home? Harold's Restaurant, Bar & Rooftop Terrace has the perfect way to celebrate with its Family Meals To Go! Choose from main courses of Mama’s Southern Fried Chicken, Mother’s Day Lamb Chops, or Mama-Mia with Beef Bolognese Lasagna. The three Family Meals to go start at $45, come with sides and a choice of desserts and feed two to six. (There's a hand-picked selection of wines to add on at reasonable prices, too.) To pre-order for weekend pickup, visit the Harold's website or call (713) 360-6204.
https://www.haroldsheights.com/store/