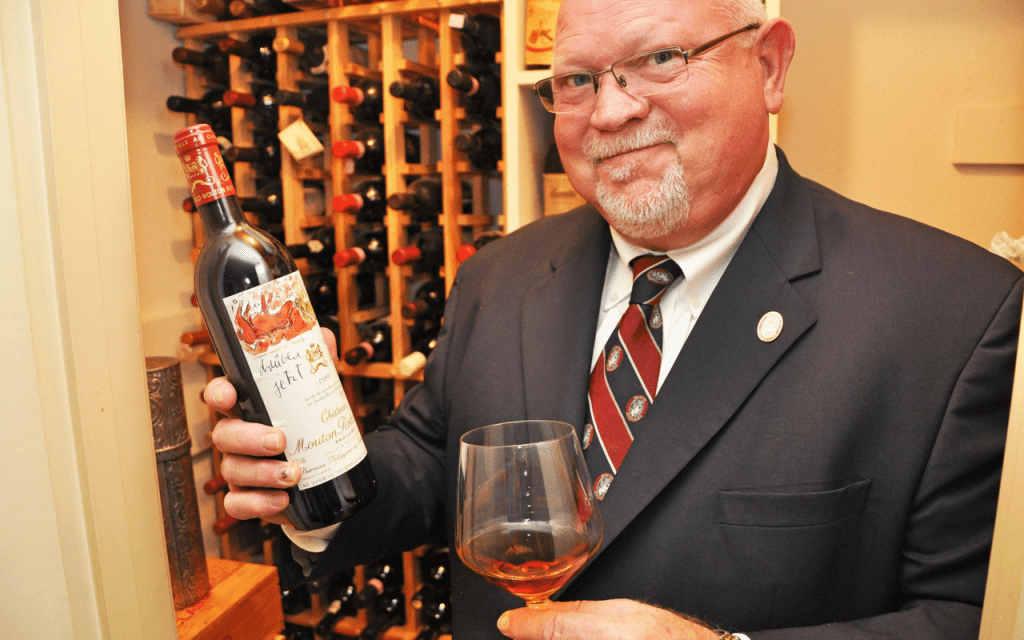 From 2005 until 2016, Guy Stout was the only Master Sommelier in Houston and one of the first to ever pass in Texas. The Court of Master Sommeliers administers the exams, which are so famously difficult that movies have been made about the experience. Lately, Stout has had the number 15 on his mind.

That’s the number of years he’s been involved with Wine & Food Week in The Woodlands — in other words, since the inception of the week-long festival comprised of a series of events celebrating the joys of food and wine. He even has his own showcase, “It’s a Guy Thing.” “It’s a special evening for the guys where we drink wine, hang out and have fun. There are great restaurants participating, great wineries pouring wine. It’s not just for guys but, you know, it’s a ‘Guy’ thing.” Other features include onsite shoe shines and indulging in fine cigars.

To mark the occasion, Stout is sharing his 15 favorite wine tools. Unlike many gadgets, these are truly useful and can come in handy many times over the years.

1. Teardrop-Shaped Decanter: “The shape makes it easier to pour from,” said Stout, who also says he decants just about any non-sparkling wine to aerate it, regardless of its value. “The flat-bottomed ones are called captain’s decanters and were designed for ships so these wouldn’t fall over if seas were rough. Those are great for sailing but when you’re trying to pour those last few ounces out of the bottom, you almost have to be double-jointed.” Teardrop-shaped decanters are readily available and at price points ranging from $15 or less for simple glass ones to impressive crystal vessels.

2. Coravin: This device proved a game-changer after its introduction. It’s outfitted with a large needle. Once it’s inserted into the cork, the wine can be poured through it without having to actually remove the cork. Restaurants and bars use it to let customers try expensive wines by the glass instead of having to commit to buying the entire bottle. Stout uses it at home to preserve even inexpensive partial bottles. “I often just want a glass of wine and just tap in, get a glass and the wine’s still going to be good for the next week or next month,” he said. The introductory Coravin model is $199.

3. Waiter’s Corkscrew: While some consumers like the “winged” cork pullers, Stout considers these awkward to use. Wine pros use a flat waiter’s corkscrew, also called a wine key. “It’s a great device and still one of the best,” said Stout. Ideal waiter’s corkscrews include a knife for cutting the foil on the neck of a wine bottle, a double-hinged lever (called a “double lift”) to brace on the lip of the bottle to leverage out the cork in two stages and a corkscrew in the middle. (Avoid the rookie mistake of not screwing in the corkscrew all the way or you’ll risk breaking the cork off in the bottle.) While waiter’s corkscrews with fine wood handles and custom holsters can be expensive, a perfectly good, functional model can be had for only $8.99. (Those who regularly attend wine events probably already landed one — or 10 — for free as these are often given out as promotional or goody bag items.)

4. The Durand: This is the brand of corkscrew that Stout prefers to open older wine bottles, which tend to have fragile corks. (Nothing can dampen the joy of a rare bottle like little cork bits.) The Durand includes not just a corkscrew but also a tool with two long, thin prongs. “The two combine to withdraw a cork perfectly,” says Stout, who also uses these as very nice gifts for good, wine-loving friends. This patented device is $125 (a small price to pay for anyone who regularly opens bottles worth hundreds or thousands of dollars) and can be ordered online. The pronged piece is also called an Ah-So opener and can be bought and used separately (but may be more difficult to use than The Durand without the corkscrew part).

5. Foil Cutter: Openers such as The Durand don’t include a knife for foil-cutting. This is one instance where a dedicated foil cutter can actually come in handy. It’s also good for neatniks who are bugged if they can’t cut a pristine seam around the opening by hand. (Honestly, though, this is too trivial to worry about. Just remove all of the foil if you want. The point is getting to the wine and drinking it.)

6. Proper Wine Glasses: “I don’t like ‘fishbowls’ — those big wine glasses,” says Stout. “I use nice, reasonably sized ones, such as a 16-ounce red wine glass that you can put a few ounces in and swirl it around — which does the same thing as aerating devices.” Stout prefers pear-shaped glasses. “Make sure the glass is light and well-balanced. The glass shouldn’t be too thick and I avoid those with a seam on the lip of the glass.” While some people like the more casual, stem-less wine glasses, traditional stemmed glasses are more elegant for entertaining. “I avoid holding a wine glass by the bowl,” he added. “If it has a stem, you can also avoid warming up the wine with your hand or leaving your fingerprints all over the glass.”

7. Lint-Free Bar Towels: It’s always a bummer to carefully wash and hand-dry wine glasses only to discover that the towel left lint all over them. Good bar towels are essential, according to Stout, and while there are now lint-free microfiber towels available, well-made cotton dishtowels are inexpensive and also get the job done. “I use hot water to clean my glasses and a nice, lint-free cotton cloth is great to polish them up,” Stout said.

8. Cork Pops Wine Bottle Opener: This is a great, inexpensive tool for those who are opening a lot of bottles at big parties or events (or simply have no patience). “It uses carbon dioxide gas,” explained Stout. “You drive the needle through the cork, push the cartridge and the cork pops right out. You can open a lot of bottles real quick. I recommend these for hotels that host banquets.” According to the Cork Pops website, one cartridge can open between 60 to 80 bottles of wine before needing replacement. The cost for the opener is surprisingly reasonable: less than $30. A pack of two cartridge refills is $11. An important safety note: NEVER use this to open sparkling wine!

9. Wine Refrigerator: “For home use, these are terrific,” says Stout. “These days even Lowe’s and Home Depot carry them.” Most consumers are going to be well-served by one that holds 24 or 48 bottles, but those with big collections can certainly buy a wine fridge (or several) with more capacity.

10. Wine Racks: For those without wine refrigerators or who simply need more storage, wine racks are indispensable. Laying bottles down ensures that corks stay moist. Wine racks come in just about every imaginable shape and size, including decorative six-bottle holders, 96-bottle modular, wooden constructs and even freestanding bars with plenty of built-in space for wine.

11. A Durable, Classy Wine Transport Bag: These range in price and quality all the way from lightweight, two-bottle freebies given out at wine events to tricked-out leather bags. “I’ve got so many bags. I’ve got a leather case that holds two standard bottles and is equipped with a corkscrew. It’s beautiful and excellent,” says Stout. He says he also has four-bottle and six-bottle carriers. Some are thermally insulated and even include reusable ice packs.

12. Wine Protectors for Travel: Isn’t it fun to bring back wine as a memento of a trip? What’s not fun: failing to pack a wine bottle properly and discovering all your white shirts are now rosé. Bottle protectors such as the WineSkin are made of bubble wrap encased in extremely durable plastic and the adhesive is tough enough to reseal over multiple uses.

13. Vineyard Fresh Wine Preserver: This device uses argon gas to preserve the remainder of an opened bottle of wine. Found in the air we breathe but heavier than oxygen, the harmless gas forms a protective layer over the surface of the liquid when sprayed into a wine bottle. A two-pack aimed at consumers costs $29.95 and there’s even a mini-sized two pack for travel use or gift-giving.

14. Levered Wine Stoppers: Some of the best have a lever that creates an airtight seal, thus ensuring additional air doesn’t get into the bottle. These even work with leftover sparkling wine, the effervescence of which has a tendency to push out more traditional stoppers.

15. Silicone Wine Stoppers: Stout likes these stoppers because the soft silicone molds to the bottle opening. They’re not subject to breaking and also come in handy for other types of bottles with similarly sized openings.

A few final tips from Stout for wine lovers who are visiting venues such as pools that do not allow glass (but do allow alcohol): rather than transferring bottled wine into plastic, instead check out some canned wine. “Rosés, Pinot Grigio, Chardonnay — there’s a bunch of cool stuff. There are even sparkling wines in cans,” he said.

Most of all, though, for occasions such as these, Stout emphasizes that it’s not the wine that is important — it’s the companionship. “If you’re on a picnic, how serious do you want to be about the wine? It’s about the person you’re with and being outside. It’s not about the wine.”

Disclosure: Houston Food Finder may receive a referral fee from the above Amazon product links if a purchase is made. Wine & Vine Time Productions, organizer of Wine & Food Week, was a publication advertiser as of press time.